The NBA star made a personal appearance at the concept store, which has also collaborated with his eyewear brand on limited-edition frames. 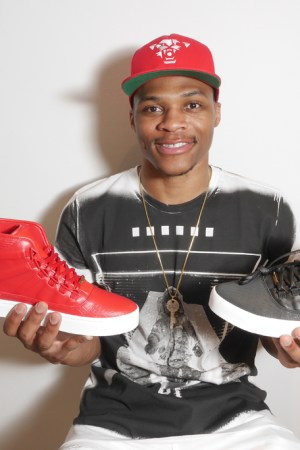 SOLE PROPRIETOR: Seeking to cement his status as a fashion entrepreneur, NBA star Russell Westbrook made a personal appearance at Colette on Friday to unveil his debut shoe for Jordan Brand and tout the Paris concept store’s collaboration with his eyewear label, Westbrook Frames.

The Paris, an aviator-style frame with mirrored gold lenses, is available exclusively at Colette, priced at 170 euros, or $190 at current exchange. Westbrook said the eagerly awaited Jordan Westbrook 0, due to go on sale on July 11 in the United States, would retail for around $125.

Colette had 40 pairs in stock – 20 red and 20 black – but they were not an instant sellout, perhaps because most of the fans queuing to meet Westbrook were teenagers. The Oklahoma City Thunder point guard is pondering how to make his future brand offerings even more accessible.

“Moving forward, I want to be able to create, obviously, my own brand and my own line and make it affordable to people from all across the world – inner city, wherever – because I was one of those guys that grew up in an inner city and wanted to buy nice things, but sometimes you can’t afford them,” he said.

Westbrook, who has been chronicling the Milan and Paris men’s shows for Vanity Fair’s Web site, said the Jordan project was a dream come true.