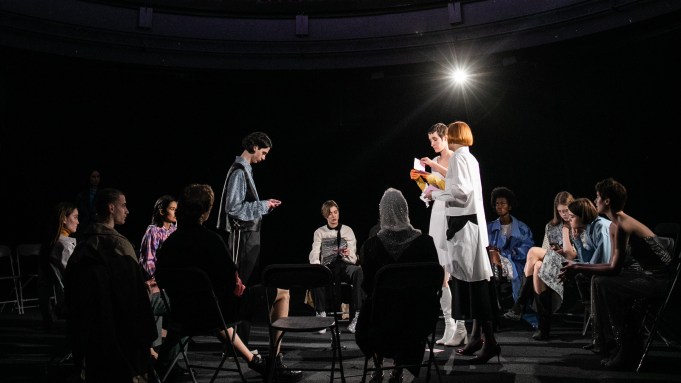 GROUP CHAT: “I have a lot of crazy friends who behave terribly, but I always forgive them because we are so close,” confessed a model at the WOS by Andrey Artyomov (formerly known as “Walk of Shame”) presentation. “When you’ve been friends for so long, sometimes you forget to be polite.”

Friendship was among some of the topics discussed by the models at the event on Sunday, which took the form of a group conversation.

“I prefer to call it a meeting of friends rather than therapy,” said Artyomov about the performance, titled “Chamber of Empathy.” “When the federation put me on the official schedule for the first time in the six years I’ve been designing, I struggled with the traditional form of the presentation. I thought it was better to do a performance, but something real. So I called up friends of mine and young people from all around the world — Baghdad, Kiev, Minsk, Paris — and got them to start a conversation.”

Inspired by “Fight Club,” both the David Fincher movie and the Chuck Palahniuk book, a group of 15 twentysomethings sat in a circle in a dark room at Éléphant Paname sports club, while two of them faced each other and talked about their feelings.

Moderated by Berlin artist Maru Mushtrieva, the conversation was only part staged: the first models were prompted to speak, but the discussion soon flowed as group members chimed in and asked questions, giving the impression of a particularly deep group chat. The designer wanted to play with the idea that everyone may be open on social media, but people still remain closed IRL, creating a lack of sincerity in certain relationships.

The topic of friendship kept coming up, in particular the end of childhood friendships once one hits adult life. “One of my closest friends broke up with her boyfriend and went a bit crazy,” a model said. “We had known each other for eight years but I needed to take a break, which she understood. Sometimes friends take different paths, but they meet again eventually.”

As far as the looks were concerned, they blended easy-to-wear silhouettes with unexpected details. Rows of beads on a velvet top echoed the water droplets covering skin when just stepping out of the shower, while a draped shirt was created to mirror the curtains found in traditional Russian apartments. In pure Millennial fashion, all leather was fake, and the oversize denim jeans had one very current details: the imprint of an iPhone on one of its back pockets.