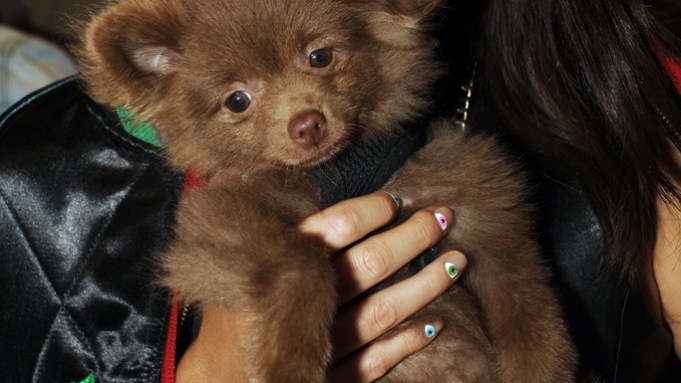 RxArt, the nonprofit that links with contemporary artists to transform hospitals into comforting, engaging spaces for children, held its 13th annual fundraising auction in Manhattan on Monday night at Lever House.

Scharf — who came to prominence with the likes of Keith Haring and Jean-Michel Basquiat in the Eighties, and whose blend of street culture and pop imagery recently adorned the Bowery Mural on East Houston Street — said he was most impressed by the Cindy Sherman self-portraits on display and felt humbled by the spotlight. “I feel honored to be able to make some kind of light in these kids’ depressing — hopefully moment — in their lives,” he said. “I’m honored to be able to transform a depressing stairwell into something that maybe will take their minds off what’s going on, and maybe if I can make any difference in any of the healing process, then I’m thrilled.”

Elettra Wiedemann scanned the room — which included pieces by Terry Richardson, Ryan McGinness, Aurel Schmidt, Maripol, Robert Longo, Leo Fitzpatrick, Kadar Brock, Olaf Breuning, KAWS and Rob Wynne — with her husband James Marshall. “We just bought a new house, so we have a lot of walls to cover,” she said. Fabiola Beracasa, who caught up with artist Jeanette Hayes near one of three bars serving Champagne Nicolas Feuillatte and Patron cocktails, said she favored the Rob Pruitt painting because she loves his panda artwork. André Saraiva was drinking orange juice. “It’s too early. I only start drinking after ten,” he said.

Kembra Pfahler, just off the plane from Los Angeles, was wearing a floor-length coat that she had customized herself. (No stranger to fashion design, the artist, filmmaker and musician once had her own fashion line, called Kembra, circa 2003.)

“I got to visit Rick Owens when he was here over the summer and I saw him preparing for his [spring collection], so I’m looking forward to seeing that show in Paris,” she said. “I don’t go to Paris often, so I’m really looking forward to going and seeing Givenchy as well. Riccardo [Tisci] made me a tuxedo for the CFDA awards this year. They came over to my house and everything; it was like a glamorous vacation.” She searched through her iPhone photo gallery to unearth a photo of the outfit. “Oh, Instagram. I love Instagram. I got kicked off! But I didn’t intend to [post something dirty.]”

Bill Powers arrived sans wife Cynthia Rowley. “It was funny because Cynthia’s mom and her aunt were in town [during fashion week], so she was so busy,” he said. “For my birthday, I took her mom and her aunt out to dinner. She couldn’t even come.”

Around 8:30p.m., Simon de Pury took to the podium with his gavel, as he does, and a lace painting by Mark Flood projected onto the wall. “This one is called ‘August Sex,’ and I know it’s September now,” he said. “But it’s very beautiful to look at all the time.”