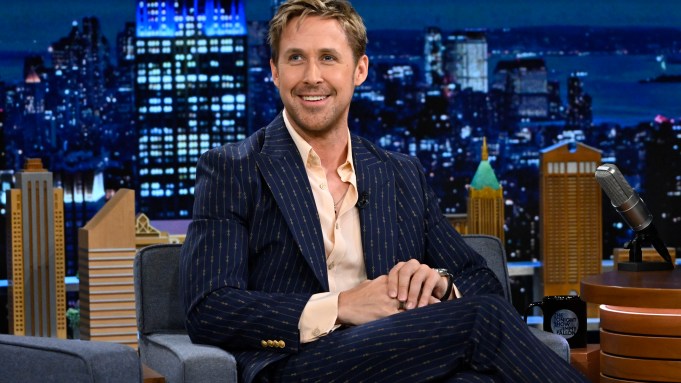 Ryan Gosling is continuing his streak of fashion-forward moments in Gucci.

On Thursday, the actor appeared on an episode of “The Tonight Show” wearing another look by the Italian luxury brand. It was a navy suit stitched with gold embroidery paired with a pastel peach-colored shirt, white socks and leather and snakeskin loafers with the brand’s signature GG logo.

He is usually styled by Mark Avery, who has also dressed him in Gucci outfits for the press tour on his new Netflix movie “The Gray Man,” with Chris Evans and Ana de Armas.

During the segment, Gosling spoke to host Jimmy Fallon about his viral Ken picture for his upcoming film “Barbie” with Margot Robbie.

“I was surprised how some people were kind of clutching their pearls about my Ken as though they ever thought about Ken for a second before this,” Gosling joked.

“They never played with Ken. Nobody plays with Ken, man,” the actor said.

Not much is known about the anticipated “Barbie” film, which is directed by Greta Gerwig, except for its release date of July 2023. Will Ferrell will also star in the film as the chief executive officer of a toy company that may or may not be Mattel, which manufactures the famous doll.

This week, Gosling attended the London premiere of “The Gray Man” at the BFI Southbank wearing a pastel-colored suit by Gucci, featuring a lilac suit jacket over a white button-down paired with Millennial pink trousers and white leather shoes.

At the premiere in Los Angeles last week, the actor also wore a look by Gucci, which was a seafoam two-button, notch lapel jacket with green wool trousers over a striped button-down and ivory leather lace-up shoes.

“The Gray Man” follows a CIA agent, played by Gosling, who is hunted across the globe by a sociopathic rogue operative, played by Evans, after he uncovers the damning secrets about the agency.

“He’s more of a blue-collar Bond. He’s a working-class guy,” Gosling told WWD about his role. “He’s not under any romantic ideas of what it’s like to be a spy, you know? He’s like an analog hero in a digital world. He doesn’t have tech, he doesn’t have gadgets, he has ingenuity and a sense of humor.”

The film had a limited theatrical release on July 15 but will be available to stream on Netflix starting Friday. According to Deadline, it is the most expensive movie ever made by Netflix with a budget of $200 million.

PHOTOS: See Ryan Gosling and Co-Stars at ‘The Gray Man’ Premiere in London