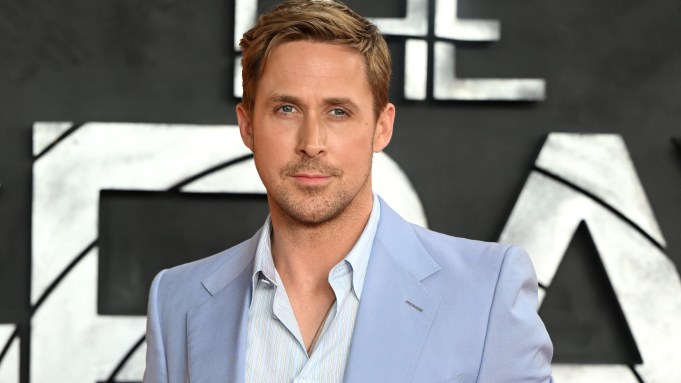 Ryan Gosling is continuing his “Ken-ergy” for his latest appearance for “The Gray Man.”

On Tuesday, the Oscar-nominated actor attended the London premiere of his newest Netflix movie at the BFI Southbank wearing a pastel-colored suit by Gucci, featuring a lilac suit jacket over a white button-down paired with Millennial pink trousers and white leather shoes.

Gosling was styled by Mark Avery, who also works with the likes of NFL star Aaron Rodgers. Avery dressed Gosling for the past two premieres, for both of which he wore looks by Gucci.

The suit complemented the actor’s new blond hair, which he dyed for his upcoming role as Ken in Greta Gerwig’s anticipated “Barbie” movie.

His costars from “The Gray Man” also joined him on the red carpet, including Ana de Armas, Chris Evans and Regé-Jean Page. Its directors, Anthony and Joe Russo, known professionally as the Russo Brothers, were in attendance as well.

The action thriller movie follows a CIA agent, played by Gosling, who is hunted across the globe by a sociopathic rogue operative, played by Evans, after he uncovers the damning secrets about the agency.

“He’s more of a blue-collar Bond. He’s a working-class guy,” Gosling told WWD about his role. “He’s not under any romantic ideas of what it’s like to be a spy, you know? He’s like an analog hero in a digital world. He doesn’t have tech, he doesn’t have gadgets, he has ingenuity and a sense of humor.”

“The Gray Man” marks Gosling’s return to film after a four-year hiatus. His last movie, “First Man,” was released in 2018.

The film had a limited theatrical release on July 15 but will be available to stream on Netflix starting Friday. According to Deadline, it is the most expensive movie ever made by Netflix with a budget of $200 million.