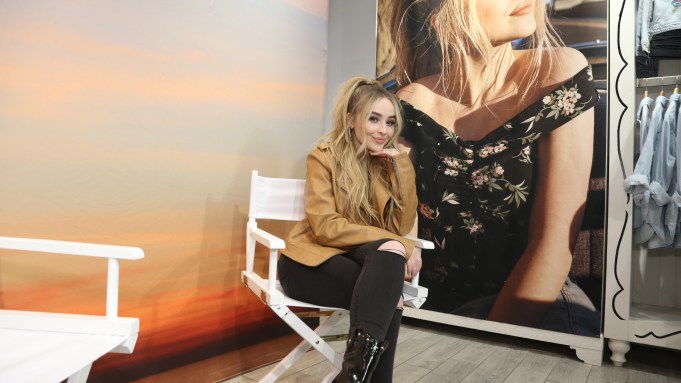 Sabrina Carpenter has embarked on a new gig as fashion collaborator. The American singer, songwriter and actress was in New York on Thursday at Aéropostale’s store at the Manhattan Mall to preview her new fashion collaboration with the teen retailer. She is the retailer’s brand ambassador, and was the face of Aéropostale’s holiday campaign.

According to Aéropostale, the capsule line as 25 stockkeeping units, and will be available in stores beginning on April 8.

Carpenter told WWD that as the youngest of four girls, she wore a lot of “hand-me-downs.” When she finally could buy things that fit, Carpenter said she looked to brands such as Aéropostale. As for her decision to team with the teen retailer, Carpenter said, “The price point is reachable for my fans. They want a piece of me, and I loved that these [pieces] are affordable.”

As for the collaborative process, Carpenter said, “I saw sketches and swatches. They had decision makers who gave me their choices, but they were totally open to me saying, ‘Can you make a polo like this?’” She explained that she would give some ideas on how to adjust or tweak the design she was shown. Carpenter also said that she has been designing non-apparel merchandise with her sister, but found the fashion collaboration to be “more fun.”

Although most of the focus is on the women’s apparel, Carpenter pointed out that some basic pieces, whether a denim jacket or a T-shirt, could be worn by either gender.

In general, polos and Ts at Aéropostale start at $7, while dresses and rompers start and $14 and bottoms begin at $16.