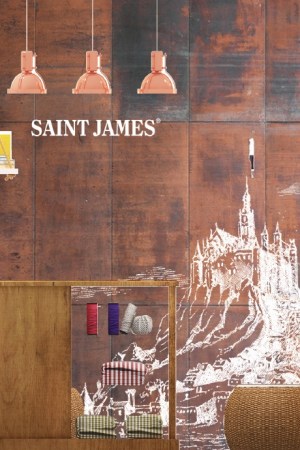 E-Commerce Platform The Carpentry Carves Out Space for Black Designers

FRENCH FLAIR: Saint James has re-dropped anchor on the Upper East Side.

The French nautical brand returns to the neighborhood with a new store slated to open Feb. 1. It arrives less than four years after Saint James closed its store at 79th Street and Madison Avenue and relocated to 319 Bleecker Street.

The new 540-square-foot unit at 41 East 78th Street will carry men’s and women’s apparel and accessories.

“We want to create a neighborhood store for our clientele of locals,” said Benjamin Auzimour, manager for the U.S. division. “They already know us because they were shopping at our first store [on Madison Avenue]; and from New England, Florida, etc. where we have a presence.”

Channeling its regional heritage, the new store — designed by Creative Capital agency — will feature shelves made from reclaimed driftwood, a raw wool station display and a section dedicated to peacoats.

Auzimour noted that the Bleecker Street store is more cosmopolitan and puts a larger emphasis on the navy roots and its staple striped T-shirt.

The opening will coincide the revamping of the label’s e-commerce Web site in 2016.

The Saint James collection is carried countrywide in a network of specialty and concept stores. Worldwide, it operates more than 50 stores, about half of them with franchises. The company generates a turnover of a bit more than 50 million euros, or $54 million at current exchange rates, with about 40 percent generated by exports.

The firm employs 312 at its factory, still located in the village of Saint-James, about 13 miles from Mont Saint-Michel.

When asked if the company had plans to open other freestanding stores stateside, Auzimour said: “Yes, but within a ‘Saint James timeframe’: We’re owned by our employees therefore we’re free of taking the time to make the right decisions to have a healthy business.”

During a VIP event for the opening of the store on Feb. 4, a “remailleuse” is to come from Saint-James to demonstrate the hand-knitting step known as “remaillage” — on the Bretagne sweater, a new piece from the spring-summer 2016 collection.