By Miles Socha and Laure Guilbault on July 6, 2016
View Slideshow 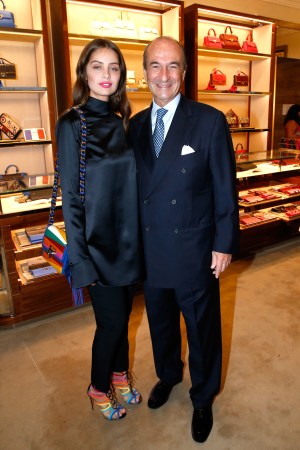 ON THE AVENUE: There was a Florentine feeling on Avenue Montaigne Wednesday night when Salvatore Ferragamo feted the reopening of its boutique, now with a second floor.

Guests such as Marie-Ange Casta, Bruno Frisoni and Roxane Mesquida sipped spritz and chilled out around fountains in front of the boutique. Meanwhile, on the second floor, DJ Cecile Togni mixed Italian and French tunes, including Franco Battiato, Phoenix and Cassius.

“It’s the largest store in Europe. It’s even larger than Florence, and also the most beautiful,” said chief executive officer Michele Norsa, who will pass the baton to Eraldo Poletto on Aug. 2.

The Italian brand expanded to a second floor, previously occupied by lawyers who had obscured its ceiling, marble fireplaces, chevron parquet, molded glass and other Parisian features. Ferragamo buffed them back to their previous glory and kept the ambling apartmentlike layout. Norsa said the brand now had sufficient space to exalt all product categories for men and women, including jewelry.

The 14,000-square-foot space is appointed with an array of Italian furnishings and objects from the Thirties, Forties and Fifties.

James Rousseau was among the guests. The model-cum-actor-musician is to appear on the History channel, in a TV show called “The Bastard Executioner.” “I play a medieval knight,” he said. “I’m a killer who works for a brutal dictatorship, if you will. And my boss is Stephen Moyer of ‘True Blood.’ He’s brilliant.”

The Italian house will celebrate its 90th anniversary next year, said Leonardo Ferragamo, a son of the late Salvatore Ferragamo.

The group is diversified, owning six hotels in Rome and Florence. Will they open more? “Probably. We’re looking at a couple of capitals in Europe,” he said. “Hospitality is close to fashion. One starts where the other ends. It blends nicely with the culture of the family.”