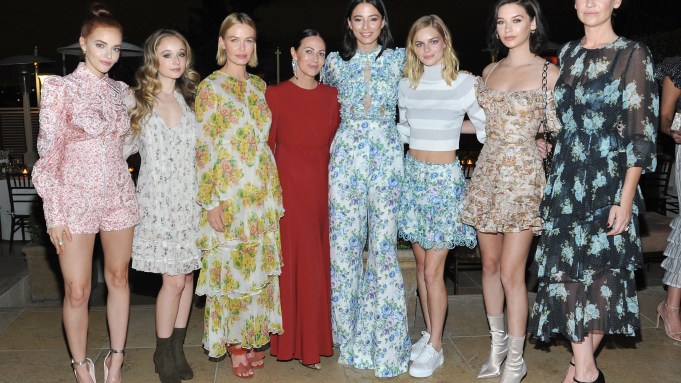 “We like to be wherever our girl is,” said Nicky Zimmermann, cofounder and designer of the label that bears her and her sister Simone’s last name. The designer was in Los Angeles to shoot the brand’s spring ad campaign, so she took the opportunity to celebrate at a dinner hosted by her fellow Australians, editors Laura Brown, Christine Centenera and Jillian Davison. The night before, Zimmermann hosted a VIP shopping party at her store on Melrose Place.

Zimmermann and husband Chris Olliver, the company’s chief executive officer, were off next to check out spaces for a store in San Francisco. The company has 26 stores in Australia, one in London, and six in the U.S. “We tend to open in places where our customers travels to,” she said. “It’s not so much about trying to hit a certain number, but it’s more about having fun. Most Australians know how to have fun.”

Case in point: the weather seemed to cooperate until the dessert course was served, but as the sticky toffee pudding came out, so did the rain drops. Not to be deterred, the well-coiffed crowd put their white dinner napkins on their heads and carried on.

“It’s raining Handmaids,” posted Lovell on her Instagram after she took a photo of Madeline Brewer (who stars on the actual show “The Handmaid’s Tale) posing with two other guests all wearing makeshift white bonnets.