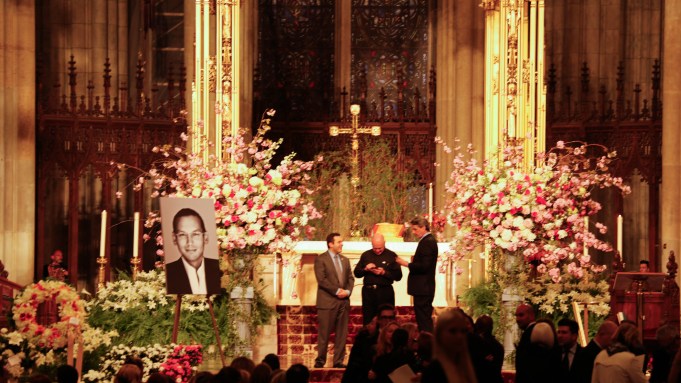 Barberi Gonzalez died March 24 at the age of 40. He served as president and creative director for the Nancy Gonzalez label of luxury, exotic skin accessories.

Barberi Gonzalez was known for his “exuberant” persona, a word that was oft used to describe him in speeches at Tuesday’s service. The memorial’s program cover featured a photo of him smiling, perched atop a Daniel Duren-designed pedestal in Paris’ Palais-Royal — his arms stretched as wings.

The mass began with a eulogy by Barberi Gonzalez’s mother, Nancy Gonzalez, who described her son’s strengths as “genius, brilliance and creativity.” Wearing sunglasses, Gonzalez addressed the crowd — thanking them for their friendship and support.

Fargo described Barberi Gonzalez as, “someone who was and is so vivid,” who had “an extraordinary antenna for creativity and beauty.”

McKee, who was consulting for the Nancy Gonzalez brand at the time of Barberi Gonzalez’s death, was also a close friend of the fashion executive. She described him as “unforgettable, irreplaceable and a limited edition.”

McKee noted that while “the worlds of art fashion and designs were his beacons,” Barberi Gonzalez was a “truly complex” individual.