A sold-out crowd of 2,000 strolled the bridge Friday night for cocktails, canapes and a performance by Lyle Lovett and His Large Band. 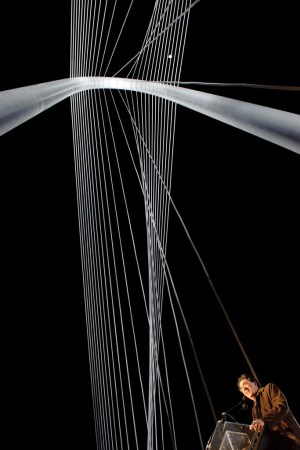 ARCH OF TRIUMPH: Santiago Calatrava visited Dallas last week for fetes and fireworks celebrating the architect’s $182 million bridge from downtown over the Trinity River to west Dallas. A sold-out crowd of 2,000 strolled the bridge Friday night for cocktails, canapes and a performance by Lyle Lovett and His Large Band. “This is honestly the first time we’ve played in a bridge,” Lovett said. Named for the late Margaret Hunt Hill by her oil-rich descendants, the 400-foot white arc and fan of cables is a striking addition to the city’s western skyline, though the bridge won’t open for traffic until month’s end. It’s been derided as a “bridge to nowhere” and facsimile of a Calatrava bridge in Italy, but the MHH bridge spurred a land grab on the west side of the flood plain and hopes for economic development in the blighted area. It also led to a sister city accord between Dallas and Calatrava’s native Valencia, Spain. Last week, Valencian couturier Marta de Diego and fine jeweler Vincente Gracia held a trunk show in hopes of developing business here. Gracia, whose pieces are all unique and symbolic, currently sells in the U.S. only at Barneys New York.