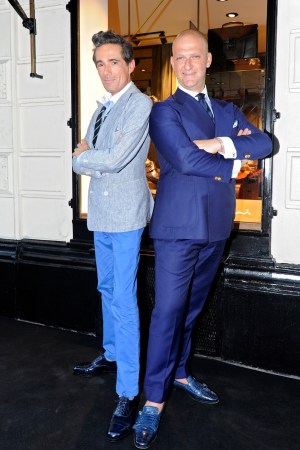 Modern Design to Be Spotlighted in Two-Part Show

IN YOUR SHOES: Santoni feted the opening of its first stand-alone boutique in the City of Light on Thursday night.

The store showcasing the Italian footwear label’s men’s collection is located at 36 Avenue George V, next to Brioni, Stefano Ricci, Armani and Hermès boutiques. “It’s a high-end street for men’s fashion in high equality,” said Giuseppe Santoni, the son of the house’s founder and its chief executive officer.

The 538-square-foot store replicates the concept designed by architect Patricia Urquiola for the flagship boutiques in Via Montenapoleone in Milan and Madison Avenue in New York. The boutique is divided into two spaces: the entrance with the walls in embossed orange and green fabric by Kvadrat; and a more intimate space with a Parisian flair with its ancient fireplace in white marble and a mirror on top of it.

The brand also has shops-in-shops at the Galeries Lafayette, Le Bon Marché and Printemps department stores. It is already seeking a second stand-alone location in Paris, on Rue du Faubourg Saint-Honoré to showcase its men’s and women’s collection together, Santoni said.

“France is our second-largest market in Europe before Germany so France has to win tonight,” he said with a laugh, referring to the France-Germany match of the UEFA Euro 2016 soccer tournament.

The label is slated to continue its retail expansion with a flurry of store openings by the end of the year including Venice; Macau; Bal Harbour, Fla., and a second store in Doha, Qatar.

“I love Italy,” said the interior designer who worked for Italian fashion houses including Fendi (alongside Karl Lagerfeld) and Moschino. Darré plans to move Maison Darré, his showroom on Rue du Mont Thabor and is preparing a vast auction with the Piasa auction house in November.

Guests then headed to the sprawling garden terrace of Loulou, the new Italian restaurant in the museum Les Arts Décoratifs, with a view over the Tuileries Garden, the Louvre Pyramid and the Eiffel Tower. After a tuna dish with Sicilian pistachio, Darré gave a dancing performance with stylist Catherine Baba and the Eiffel Tower lit up as France won the game.