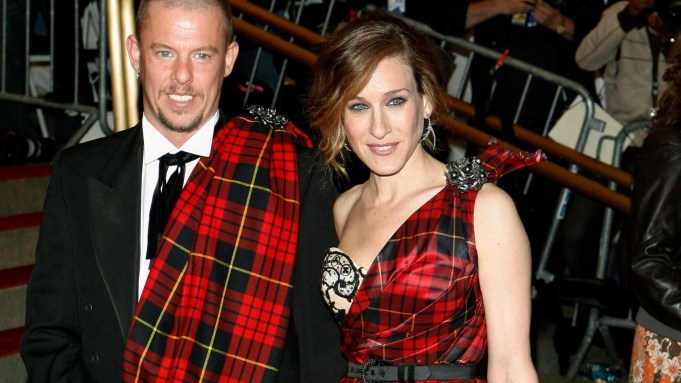 The countdown is on for the 2019 Met Gala, which takes place in New York on May 6.

In anticipation of the biggest red carpet fashion event of the year, WWD is taking a look back at some of the most memorable looks from the Met’s past, others you likely forgot about and the stars that are perennial fashion crowdpleasers. As for the latter, Met Gala regular Sarah Jessica Parker, whose signature “fashion first, function last” approach, ranks high on that list.

Year after year, Parker shows her fashion chops, taking each theme head-on. Take 2006, when the actress showed up in twinning tartan with the late Alexander McQueen to celebrate the year’s “AngloMania: Tradition and Transgression” theme.

And while Parker has worn standout looks from designers like Oscar de la Renta, Valentino and Dolce & Gabbana, the actress and entrepreneur’s elaborate headwear always seems to steal the limelight. For instance, in 2018 she sported an elaborate headpiece depicting the nativity scene for the “Heavenly Bodies: Fashion and the Catholic Imagination” theme.

With an affinity for over-the-top headpieces, SJP will surely bring out something big for this year’s “Camp: Notes on Fashion” theme.

Click through the above gallery for a look at Sarah Jessica Parker’s Met Gala red carpet style evolution.

Everything You Need to Know About the Met Gala 2019

Some Designers Are Skipping This Year’s Met Gala