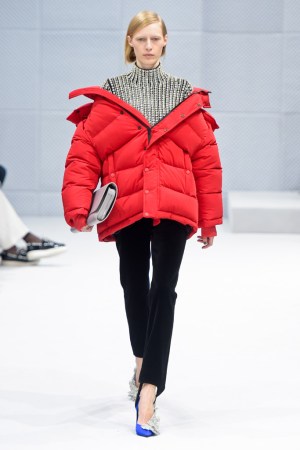 TREND TALK: Sarah Rutson took the stage of SoHo House’s movie theater for Net-a-porter’s seasonal press day presentation. The vice president of global buying highlighted 12 key trends the retailer will be pushing through their edit of the fall 2016 collections, as well as the brands they have bought into the most for the upcoming season.

Among her top trends were “Street Couture” and “Artful Mashup,” which she attributed to the influence of Demna Gvasalia at Vetements and Alessandro Michele at Gucci, respectively.

“Street Couture,” which takes inspiration from the street and merges it with sportswear, can be embraced with a number of key pieces, including the puffer jacket, the bomber and the sweater. “This is testament to the power of Demna [Gvasalia], the amount of 600 pound [or $860] sweatshirts we are selling is just unbelievable. No matter how much we buy, it’s impossible to keep them in,” Ruston said.

She added that bomber jackets have been another hero piece for the retailer across all price points; “there is no price resistance, the 4,000 pound [or $5,700] Saint Laurent bombers blew off the site.”

Off-White by Virgil Abloh is a key new launch in this category.

The Vetements effect also extends to the “Designer Denim” trend. Rutson said anytime the site carries interesting denim pieces, from brands such as Marques’ Almeida, Junya Watanabe and Off-White, they have an instant sell-out.

Given the maximalist mood set three seasons ago by Gucci — the brand was in the retailer’s low top 10 list and is now one of their top three best-selling brands — Net-a-porter will also be heavily investing in eclectic, heavily embellished pieces that embody the “Artful Mashup” trend. Mary Katrantzou’s sparkly, cowgirl dresses are key in this category, as well as Prada’s collection, which the retailer will carry for the first time next season.

Rutson said the consumer will likely be entering into the trend with accessories such as a decorated block-heeled boot or Anya Hindmarch’s humorous bags. In order to build momentum around the trend, the retailer will also be launching an exclusive capsule collection of boots with Tabitha Simmons.

As women become more willing to spend on statement evening wear again, Rutson pointed out opulent jacquard and brocade pieces by the likes of Erdem and Simone Rocha, as well as intricate body jewelry by Alexander McQueen and Christopher Kane as another key part of the company’s seasonal buy.

The Eighties mood embraced by Saint Laurent, Balmain and Moschino will be offering another spectrum of choice in statement eveningwear. “It’s the 3,000 pound [or $4,300] dress that is selling,” added Rutson.

Given the industry’s ongoing conversation on the new buy-now-wear-now model and transitional dressing, Rutson pointed to knitwear as a key category that women invest in throughout the year. Miu Miu’s and Isabel Marant’s argyle intarsia pieces, Altuzarra’s aran sweater dresses and Max Mara’s bold striped sweaters which are “cozy yet close to the body,” were among the highlights.

Rutson has also been building the company’s accessories business to match the breadth of their ready-to-wear offer, by adding new designers and with initiatives like the “Dressing From the Feet Up” campaign launched earlier this year to highlight their footwear edit.

The top high-spend designers include Chloé, Miu Miu, Saint Laurent, Balenciaga and Prada, a brand that the group’s founder, Natalie Massenet has been trying to carry online for years.

According to Rutson, fall 2016 was one of Miuccia Prada’s best shows, covering every category from hosiery, to footwear, outerwear and playful accessories such as corsetry. “The pioneer spirit was there but it’s going to sell,” she said.

Moncler, Gabriella Hearst, Facetasm, Magda Butrym, Attlein and La Ligne will be among the new launches.