‘Scatter My Ashes at Bergdorf’s’ Premieres in New York

Director Matthew Miele paints a loving portrait of Bergdorf Goodman in the documentary. 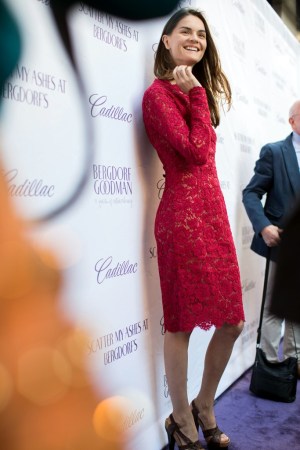 BERGDORF BIOPIC: Director Matthew Miele paints a loving portrait of Bergdorf Goodman in his documentary, “Scatter My Ashes at Bergdorf’s,” which screened at the Paris Theatre on Wednesday night as part of the luxe retailer’s ongoing celebration of its 111th anniversary. A strong designer presence, including Thom Browne, Jason Wu, Erin Fetherston, Naeem Khan, Isabel and Ruben Toledo and Michael Bastian, filled out the seats. The film’s amusing cast of personalities ranged from Joan Rivers to Mary-Kate and Ashley Olsen to Susan Lucci to Nicole Richie, all of whom shared personal anecdotes and memories.

Guests didn’t have to travel far to the after party, held on the ground floor of Bergdorf’s. “The whole part about the window displays — that could have been a whole movie,” said Glenn O’Brien, who also had some news to reveal, though he spoke in the vaguest of terms. “We might bring back ‘TV Party.’ I might do it with André Saraiva and I can’t say who else. It’ll be a little different… but the same.” The most popular person in the room may have been Betty Halbreich, the store’s highly revered 84-year-old personal shopper/fashion therapist. “Oh, I didn’t watch the film, no. I drank water, I put my head between my legs,” she said. “It’s hard to watch yourself.”