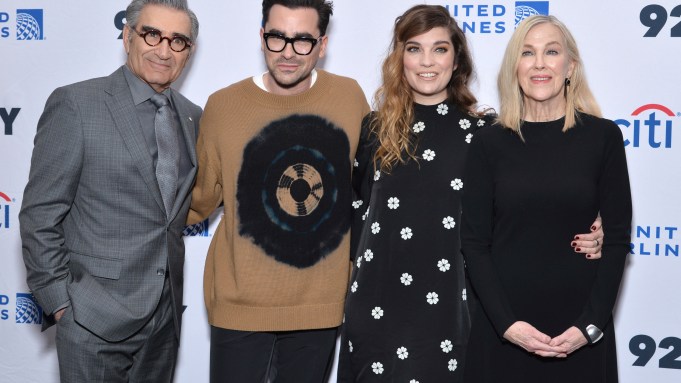 While the hit Pop TV sitcom “Schitt’s Creek” came to a close last month after its sixth season, the zeitgeist hasn’t given up on it — especially when it comes to its over-the-top designer fashion.

The show, created by father-son duo Eugene and Dan Levy, introduced the world to the wealthy Rose family as they lose all their money and are forced to relocate to a small town called Schitt’s Creek, which the family purchased years earlier as a joke. While the family is adjusting to living in a motel with little to no money, each character stays true to their extravagant designer wardrobe, which is curated by costume designer, Debra Hanson.

In the series’ behind-the-scenes special, “Best Wishes, Warmest Regards: A Schitt’s Creek Farewell,” Dan Levy spoke about the role that fashion plays in the sitcom and how the show’s wardrobe came about.

Here WWD looks at seven interesting facts about the fashion of “Schitt’s Creek.” Read on for more.

1. Daphne Guinness Was One of the Inspirations Behind Moira Rose

Catherine O’Hara’s Moira Rose is arguably the most iconic of the characters, thanks to her rotating assortment of wigs and her lavish black-and-white outfits designed by the likes of Alexander McQueen, Givenchy and Balenciaga.

When first coming up with the character’s style, O’Hara brought in images of English socialite and fashion designer Daphne Guinness, whose style consists of mostly black-and-white outfits, oversize accessories and light-reflecting pieces, as a reference for her character.

“She came to me with some references, in terms of how the character would look and she was thinking of having this sort of accent,” Levy said. “I remember finding it all quite dazzling. Little did I know at the time just how much Catherine brings to the table.”

2. Moira’s Wigs Were a Special Request from O’Hara

Moira Rose’s lavish looks are oftentimes complemented with an equally eye-catching wig. In the special, O’Hara revealed that the wigs weren’t initially part of her character’s look, but rather her own special request.

“The wigs weren’t in it and the vocabulary wasn’t in it, that’s what I got to add,” she said. “I just asked if I could wear wigs depending on my mood. It works for fashion reasons, it works for hiding or revealing what I’m feeling, it works as a protective helmet, so it’s just too much fun.”

Annie Murphy, who played Alexis Rose, revealed in the special that her and O’Hara’s costume fittings would often take hours. Murphy’s character, while not as campy as her mother’s, consisted of many bohemian-inspired looks from brands like Isabel Marant, Celine and Chloé.

4. Dan Levy Said Wardrobe Was the Most Important Element of Storytelling

Levy explained that each character’s fashion played a critical role in the show.

“Wardrobe is probably the most important element in storytelling outside of actually writing,” he said. “We as people say so much about who we are and what we believe in and what we want and what we think of ourselves by the way that we dress. To me, wardrobe was like a huge focus, making sure that we thought through each of our characters and making sure the details were there.”

5. The Costumes Were Meant to Impress Fashion Insiders

Levy explained he chose to incorporate a designer wardrobe in the show to attract viewers that are interested in fashion.

“My mandate when we started the show was that I wanted the clothes to feel real,” he said. “I wanted people who were interested in fashion to recognize pieces and say, ‘OK, so this isn’t just someone doing Zara doing Balenciaga.’”

Levy looked to vintage fashion stores and sellers to help curate the show’s wardrobe while staying on a budget. For instance, he found a vintage black-and-white Alexander McQueen dress for Moira Rose at a vintage store significantly reduced in price to $300.

“I think it got harder season after season because we kept pushing the boundaries of how far we could take our budget,” he said, “But part of that I think is what makes the show what it is. We’re really scrappy and all good things come out of a lot of hard work and sweat and tears.”

7. O’Hara Used the Wardrobe to Get into Moira’s Character

For O’Hara, the wardrobe played a critical role in helping her get into character.

Levy also saw the importance behind O’Hara’s wardrobe and wanted to provide her with the right looks to help her get into character.

“It’s important for us when Catherine comes in for her wardrobe fittings that we are bringing in clothes that she can dive into,” he said, “And I think vice versa, the clothes help inspire her in certain areas to just get that character into new and wonderful directions.”

Click through the above gallery to see more costumes from “Schitt’s Creek.”

7 TV Shows to Binge-Watch This November

WATCH: Do These Outrageous Celebrity Looks Hold Up?