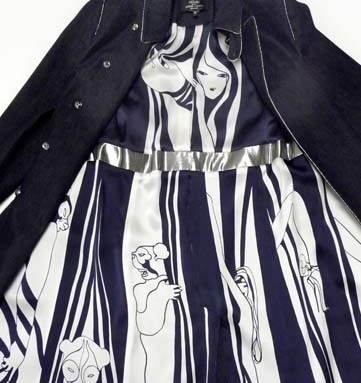 GUYS AND DOLLS: Adding an artsy twist, a section of Azzaro’s resort collection will be illustrated with characters from Olivier Kuntzel and Florence Deygas’ “The Doll and Her Bear” story, applied to the lining of a denim trench and bag as well as two silk scarf designs, in blue and white. Past achievements by the artist couple include the opening credits of Shawn Levy’s “The Pink Panther” and doodles for Carla Bruni’s music video “L’Amoureuse.” “I found the universe of the ‘Doll and Her Bear’ amusing because as a couple they’re very much like that, as are [husband] Bertrand [Burgalat] and I,” mused designer Vanessa Seward, who will fete the line’s launch during couture week on July 8 at the artist duo’s atelier in Paris’ 18th arrondissement.

COUTURE RUMBLINGS: Oscar de la Renta is expected to cruise into town in time for the opening of Paris couture week. L’Eclaireur’s Martine and Armand Hadida will host a cocktail for the designer in their Rue Boissy d’Anglas store on July 6, for the opening of his resort trunk show, which will end July 8. Loulou de la Falaise, who designs Oscar de la Renta’s high-end jewelry, will also unveil a new couture jewelry line at the event, as an exclusive to L’Eclaireur.

GOING NOWHERE: Stefano Sassi, chief executive of Valentino Fashion Group, which has a stake in Proenza Schouler, squelched ongoing speculation that he’s about to step down as he stood on the sidelines of the young designer’s pre-collection event in Florence. “I’m staying where I am — the Valentino line is getting a lot of positive feedback. It’s more modern and it’s on an interesting path,” said Sassi. “I’m keen on seeing future results.” As for Proenza Schouler, he said VFG plays a supportive, productive, and industrial role for the designers. “They are full of ideas and there’s a lot of potential,” said Sassi, who added it was unlikely a Proenza Schouler store would open this year.

LONDON CALLING: Following shows in Florence, Paris and Antwerp, Yohji Yamamoto is said to be working on a new exhibition project with London’s Victoria and Albert Museum. The event is expected to place in 2011.

WEARING JOHN MALKOVICH: John Malkovich is back on the men’s fashion circuit with a new collection called Technobohemian. The actor, who made his first foray in men’s wear with his Uncle Kimono line in 2002, will host a cocktail and presentation in Milan on Monday to promote the brand. For the collection, Malkovich teamed up with Arezzo, Italy-based production company Uomo Più Italia in the first phase of a lifestyle project the actor has under development. The collection of casual looks for guys will be unveiled at White Homme trade fair in Milan, which runs from Sunday to Tuesday.

FAMILY FIRST: A stream of well-wishers including Franciso Costa, Narciso Rodriguez, Yigal Azrouël, Stephen Burrows, Kai Kuhne, Betsey Johnson, Amy Chan, Kim Hastreiter and Cari and Matthew Modine flooded the Museum at the Fashion Institute of Technology for Tuesday’s opening-night party of “Isabel Toledo: Fashion From the Inside Out.” And not everyone beelined it to see Michelle Obama’s inaugural ensemble in the lower-level gallery. Toledo and her husband, Ruben, greeted guests with hugs and cheerfully mugged for snapshots, seemingly more jazzed about the turnout than the 25-year retrospective on display. Asked what she found most gratifying about the occasion, Isabel Toledo said, “That you’re all here. All of the work that is downstairs is there because all these people have been supporting me in my work. It’s a community. They’re all inspiring.”

FOXX NEWS: Jamie Foxx got a warm welcome at the Giorgio Armani flagship in New York on Wednesday night with a private reception held in his honor at the store’s on-premises eatery, Armani/Ristorante. The multihyphenated star was recognized this time for his musical talent with a plaque commemorating the platinum success of his latest R&B album, “Intuition,” which dropped late last year. (RCA/Jive chairman Barry Weiss was on hand to do the honors.) After the festivities were through, Fox, who fittingly donned an Armani suit for the occasion, stuck around to dine with label execs.

DOWNTOWN NEST: Unlike most artists whose big break tends to be in a solo gallery show or museum representation, Ari Tabei is breaking through in a Meatpacking District boutique. The Brooklynite’s exhibition is up at the Rebecca & Drew store at West 13th Street through July 19. She is the first winner of the Emerging Artist Award presented by Sprout, a nonprofit funded by Rebecca & Drew to turn the spotlight on new talent and to provide them with a commercial audience. A performance artist, videographer and photographer, Tabei’s work consists of garments and bags that she transforms into nests or cocoons. She was chosen by a jury made up of representatives from a variety of institutions, including the Metropolitan Museum of Art and the Guggenheim Museum.