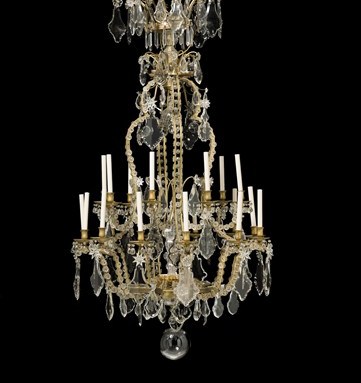 PARIS — Furniture and works of art from the Yves Saint Laurent and Pierre Bergé collection are expected to fetch up to 4 million euros, or $5.7 million, in a charity auction at Christie’s in November.

The proceeds from the sale of 1,200 pieces — including paintings, furniture, sculptures and textiles from Château Gabriel near Deauville as well as the Parisian residences of the two collectors — will be destined to HIV research and the fight against AIDS, the auction house said.

An earlier auction in February raised 373.5 million euros, or $484.6 million, from the sale of 700 items collected by Saint Laurent and Bergé, including works by Picasso, Matisse, Mondrian and Degas.

While the February auction boasted the masterpieces of the collection, the November sale will present a multitude of objects of a more understated charm, often with a very personal relevance that reflected the everyday existence of Saint Laurent and Bergé.

From the everyday life of the late couturier, who died in June 2008, collectors can covet his set of Louis Vuitton luggage, three crocodile-skin Hermès suitcases, as well as his last car, an elegant Mercedes Benz S Class, estimated at 30,000 euros, or $42,565.

Acquired in the Eighties as a vacation residence, Château Gabriel displays an eclectic interior decoration style, inspired by Marcel Proust’s novel “Remembrance of Things Past,” as well as the decor of film director Luchino Visconti’s movies.

Items from the château range from a 19th century Dutch ceiling light made of copper with 34 arms to enameled vases from the Biedermeier era.

Saint Laurent once described Château Gabriel as “my haven between two storms. I come here to rebuild my strength.”