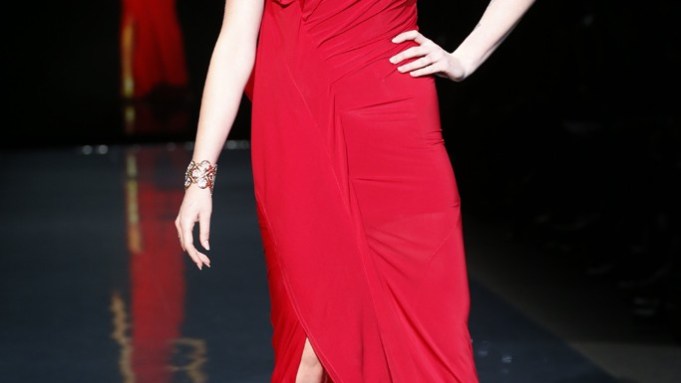 SEEING RED: Backstage at The Red Dress is always a gabfest and Thursday night was no exception with new BFFs like Bella Thorne, Lindsey Vonn, Giada De Laurentiis, NeNe Leakes and Ireland Baldwin swapping fashion tips and tattoo stories. Aside from rocker Joan “no-photos” Jett, the talent posed for photographers and fans alike. In addition to the blinding flashbulbs on the red carpet, they weathered a blizzard of such tabloid-ized questions as, “Who is your celebrity crush?”

As for her bodyhugging dress, the Olympic skier and Cynthia Rowley figured out the design in two days flat. “We think in a very similar way,” Vonn said. (So much so that they collaborated on helmet designs for her Sochi bid which ended with an ACL injury.) The duo plan to team up again both in and outside the designer’s studio. “We have a great time together,” Vonn said.

Far from vampire-ish in a biased-cut BCBG gown, “True Blood’s” Rutina Wesley said she has upcoming film roles in “Thirteen Sins” and “Last Weekend” with Patricia Clarkson. Before flying back to L.A. today, she hoped to take a snowy stroll through Central Park’s Shakespeare Garden. “New York is home to me,” she said.

Wearing a Pamella Roland dress, Anika Noni Rose said she was ready to roll. “I chose the best music – Pharrell’s Happy” even though she had nothing to do with the 24-hour music video he made for it. “I think I’m the only person who wasn’t in it. That guy was in it. She was in it,”Rose said pointing at random people. “Weren’t you in it?”

What the actress will be in is the upcoming flick “Half of a Yellow Sun,” and the Lifetime one “A Day Late and a Dollar Short,” the actress starts previews for “A Raisin in the Sun” with Denzel Washington, Sophie Okonedo and Diahann Carroll next month. The Tony-award winner isn’t shaky about sharing the stage with Washington and Carroll (who will be back on Broadway for the first time in 30 years.) “No, it’s my job. I’ve trained for this. I don’t get intimidated. We’re all about the work.”