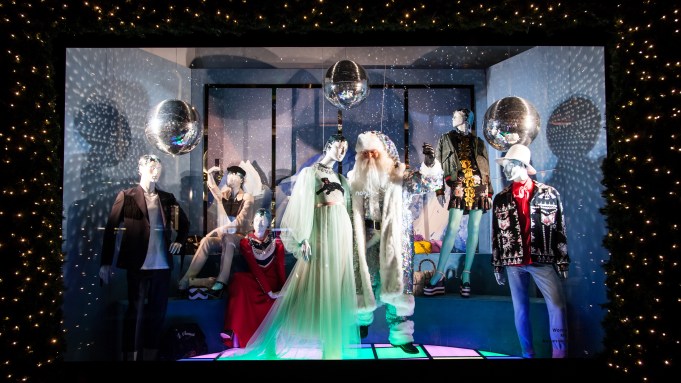 Each Santa displayed within each window dons a bespoke hand-sewn sequin suit and is pictured in different party scenarios. In one window, Santa’s workshop is in party mode with glamorous elves dressed in metallic dresses while another shows old Saint Nick on the decks as a DJ, spinning at an après-ski party.

“We’ve been thinking of creatively expressing the idea of party and togetherness at the heart of the well-known phrase ‘Celebrating Christmas’ for a while now,” said Linda Hewson, creative director at Selfridges. “It’s been enormous fun to design and produce such upbeat, sparkly and colorful displays. Best of all, we decided to bring back Santa, who has been absent from our windows in the past few years. So we’ve put the great man himself in all our creative windows, starring as the ultimate minister of fun, dressed in the most amazing handmade red sequined suit as he dances around in several tons of glitter. There is no mistaking that more than ever, our windows are saying ‘Happy Christmas’ very loudly!”