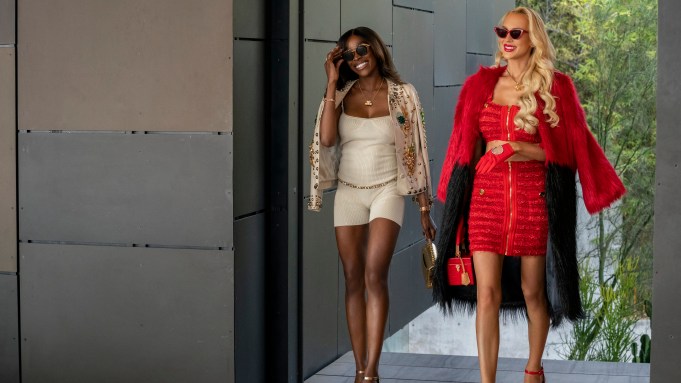 It’s no secret that “Selling Sunset” is more than just a show about the luxury real estate market in Los Angeles.

Since the show premiered in 2019, the women on the hit Netflix reality series have become well-known not just for their seemingly successful careers as agents, but also for their dramatic storylines and, of course, their bold, vibrant grasps on fashion that continued in the program’s fifth season, which made its debut on Friday.

Its newcomers Emma Hernan, Vanessa Villela and now Chelsea Lazkani match the original cast’s energy when it comes to over-the-top dressing, with the former two joining in the fourth season and the latter making waves with her fearless personality and designer outfits in the fifth.

The anticipated and drama-filled fifth season is no exception, as cast members like Quinn and Lazkani in particular have upped their sense of style, wearing brighter colors, bolder textures and patterns and sporting more monochromatic looks.

Leading the charge for most stylish is Quinn, styled by Kat Gosik, who is well-known for her daring outfits and her personality. From a fiery all-red Balmain outfit to preppy looks by Alessandra Rich, Quinn did not hold back when it came to style in the fifth season.

“She is so much fun, because she’s like a Barbie doll. Anything she wears looks good on her,” Gosik told WWD. “I love that her style is very diverse — we can go cool and edgy and also pink and fitted. Everything fits her.”

Up there with Quinn for most audacious in personality and style is Lazkani, a London native unafraid to tell people what she really thinks. This season, the realtor seems to almost command every room she walks into, not only because of her demeanor, but also because of her outfits.

In the fifth season, Lazkani has worn designer-clad outfits, most notably a leather trench dress by Louis Vuitton and head-to-toe Burberry outfit complete with a headband and matching Chanel bag. For her first visit to the L.A.-based Oppenheim Group, she wore a gold sequined dress by Balmain, while one of her outfits at home was an all-pink ensemble by Area topped with a bright pink headband by Prada.

Quinn is not alone in the walking Barbie-doll category, as the other blonde cast members Hernan and El Moussa (formerly Young), also emanate a feminine and chic energy in their everyday work attire and topping each look with jewelry by Chanel, Dior or Gucci.

When she entered the scene in the fourth season, it seemed Hernan was giving Quinn a run for her money in terms of career and style. This season, the Boston native has been seen in outfits by Nadine Merabi, Sau Lee, Dion Lee, Bronx and Banco, among others, pairing them with bags by Bottega Veneta, Louis Vuitton, Gucci and more.

El Moussa, styled by Caitlin Jaymes, is more classic in her sense of style, wearing some fitted silhouettes to find the balance between “sexy as well as sophisticated.”

The real estate agent this season has worn designs by Fendi, Gucci, Ganni, Louis Vuitton and Retrofete while pairing them with jewelry by Chanel or Gucci and topping off her look with purses from Dior, Valentino and Chanel.

“[Heather] knows what looks good on her. She doesn’t feel pressured to try out every single trend,” Jaymes told WWD. “Our goal is always to make sure everything is catered to her body and looking as feminine [and] classy, as possible. She doesn’t really care if she’s not, quote-unquote, the ‘trendiest’ girl out there. She wants to look presentable as well as fashionable.”

A notable look worn by El Moussa in the season is a custom one by Karen Sabag for her bridal shower, which was perhaps both Jaymes’ and El Moussa’s favorite look from the season. The strapless off-white minidress captured her personality, covered in embellishments and finished with feathers on the hem.

“It was the perfect dress. Everyone in the shower kept saying: ‘If I could pick one dress that could describe Heather’s style.’ It was so beautiful,” Jaymes said.

Another agent with a unique grasp on fashion is Stause, who has skyrocketed to fame since appearing on the hit reality series. Though she works with stylist Andrew Gelwicks on events and projects outside the show, Stause styles herself on “Selling Sunset.”

Like most of the women on the show, Stause is rarely ever seen in black, always wearing bright, vibrant hues such as yellow, pink and green.

“She has a really strong understanding of who she is and what her style and aesthetic is. But at the same time she is really open to experimenting and trying different things,” Gelwicks told WWD. “She loves color and I think she utilizes color really well, which I think is so refreshing. She has a really good ability to play with feminine silhouettes, but then really juxtapose them with her own edge and really make each piece her own.”

Throughout the season, Stause is seen in designs by Cynthia Rowley, Staud, Hervé Legér, A.L.C., Alex Perry, Area, Ronny Kobo and Balmain, among others. Known for her bright, bubbly personality, Stause manages to exude that easily in the way she dresses on as well as off the show.

“From my perspective when I dress Chrishell, I think so much of her personality comes into it,” Gelwicks said. “She has such a buoyant personality, and I think that’s really reflective in her fashion, in everything she wears. There’s a connective tissue between what she’s wearing and who Chrishell is and why we all love her.”

Though the entire fifth season premiered Friday, a reunion is still in the works, premiering on May 6. Gelwicks helped style Stause for the upcoming episode.

“I think the reunion look will definitely be one of my favorite looks. It’s just really dramatic and different for anything Chrishell has been seen in so I think being able to show a different side of her is so exciting,” Gelwicks said.