Kohl’s Fires Back at Activist Shareholders Pushing for Change

On Thursday night, the designer celebrated the brand’s 10-year anniversary at the EY Tower in Downtown Toronto, where she unveiled the Sentaler X campaign with Canadian model Danielle Knudson and revealed the launch of men’s outerwear.

“To be celebrating 10 years is incredible,” Sentaler said. “The current collection for fall 2019 is the largest collection to date with a lot of references to previous styles and accent colors. Coats that were in fashion 10 years ago are still in fashion today. It’s really nice to see how diversified the collections are and can be worn by so many different women.”

A few of the different women Sentaler is referring to include British royals Kate Middleton and Meghan Markle and Canada’s First Lady Sophie Grégoire Trudeau, who have been spotted in the brand in recent years.

“One of the key reasons for the high demand is the fit,” Sentaler said. “It’s really important to me that the coats have a high visual appeal, but at the same time are very functional and comfortable.”

Sentaler launched the outerwear label in 2009 after meeting Karl Lagerfeld in Dubai. He encouraged her to follow her childhood passion — “He said ‘You either have it or you don’t, and if you have it, go for it.’” — which led her to Peru, where she discovered a hypoallergenic alpaca fabric from the Andes mountains.

Knudson, the face of the Sentaler X campaign, was the brand’s first model when the brand launched and she returned to honor the milestone. The model was filmed at the Hazelton Hotel in Toronto in lingerie and Sentaler outerwear for a “sexy theme,” according to Sentaler. 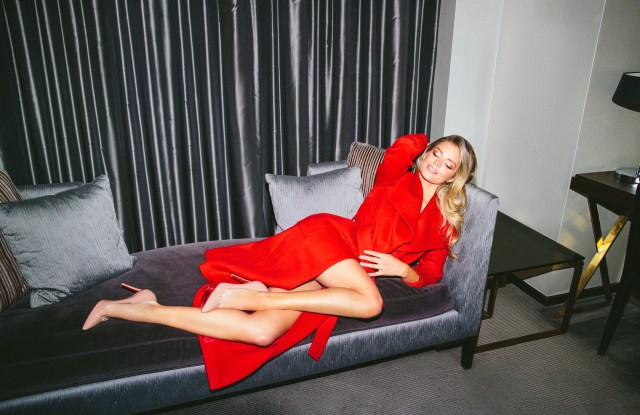 The designer also said she was asked about doing men’s outerwear “since the very beginning,” and is finally entering the category in fall 2020. “It’s something that has been in the company strategy for some time now. I’ve been very focused on making the brand globally recognized, and globally known in every major fashion city. It seems to be the natural next step.”

Sentaler is developing the new styles and said they will stay true to the brand’s DNA. Although men have shopped a few of the brand’s oversize styles, ponchos and capes, the offering will be designed exclusively for men. “Expect to see classic lines with signature details, fashion-forward details and accent colors,” she said.

The men’s collection will be priced similarly to the women’s line, and will launch exclusively on the company’s web site. It will hit retailers for the fall 2021 season.

Sentaler said about the anniversary, “The hard work combined with the passion from when I was a young girl is one of the reasons Sentaler is where it is today, because everything I create comes from passion.”