The cast of the John Hughes-inspired comedy "Seoul Searching," set at a summer camp for foreign-born teens in Korea, premiered at the Sundance Film Festival. 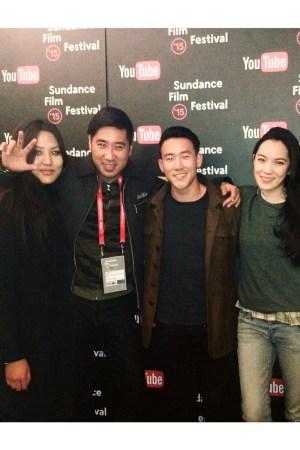 The cast of the John Hughes-inspired Eighties teen comedy “Seoul Searching,” set at a summer camp for foreign-born teens in Korea, premiered at the Sundance Film Festival on Friday night at The Marc in Park City, Utah. In the days running up to the premiere, the young cast of predominantly newcomers — whom director Benson Lee cast off YouTube and Facebook for the film he says was inspired by “the best summer of my life” — ran around Main Street, taking selfies and getting swag. “It’s crazy. I have an MP3 straightener in my bag. I didn’t even know this existed. As you straighten your hair you can listen to music?” asked newbie Rosalina Leigh, who plays an American adoptee in search of her Korean birth mother. Justin Chon — the most experienced cast member, with roles in “Twilight” and “21 & Over” — didn’t have to come to the fest to score free stuff. “I kept my boots [from the movie] because to get boots worn-in like that is hard,” admitted Chon of cribbing style from his character, based on Judd Nelson’s John Bender in “The Breakfast Club.” Jessika Van auditioned for the role of Grace, a Madonna devotee, in full “Like a Virgin” garb straight from her own closet. “I had these black lace gloves at home and I put on fishnet stockings, my boots, a miniskirt and a jean jacket vest. I went all out,” recalled Van, who went on shopping sprees with her castmates in Seoul once she secured the part. “They have the best accessories!” she said, though from the looks of it, she scored armfuls more in Park City, UT.