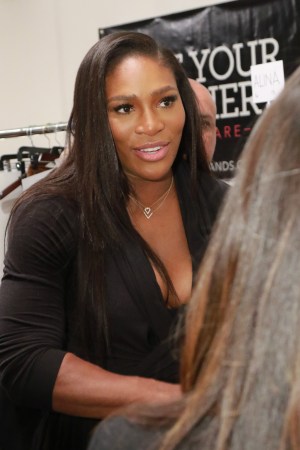 If you’re curious how Serena Williams is feeling this week, one thing is certain: She is feeling fringe.

Williams sent out 23 looks Tuesday as part of her Serena Williams Signature Statement Collection for HSN, and many featured fringe detailing. There was a suede fringe jacket, a suede asymmetric fringed skirt, a leather-fringed pencil skirt, a fringed leather cape and a leather fringe dress, to name a few. She also took her bow in a fringe skirt.

“I wanted to showcase a lot of fringe,” said Williams, following the runway show at Kia Style360.  “With our collection, a lot is available now. We had to think, ‘What’s also in style? And what is trending that people want to wear?’ Fringe is such a huge trend that we thought we could have a lot of fun with it,” she said.

Mindy Grossman, chief executive officer of HSN Inc., said that Williams’ line “is one of our fastest-growing fashion businesses.”

“The more Serena the better,” said Grossman, calling this line “the strongest she’s ever done.” It was live-streamed on hsn.com and vogue.com. “You can buy everything now,” said Grossman. When Williams makes an appearance on HSN,  “People call in and talk to her and it’s clearly empowering. We treat each time as an event,” said Grossman.

For the fall collection, Williams said she was inspired by nostalgia. “Our colors are very muted. We have some beautiful brown suede pieces. We also had some bright colors,” she said.

Despite her packed tennis schedule, Williams said she spent a lot of time working on the line, the music and selecting the models. “I have a wonderful team. The team I work with at HSN is amazing. I’m very hands-on,” she said. “I’ve been doing it for a few years. I hope to have another great show next year. HSN has been a wonderful platform for me. It’s fun to go on TV. I’m also working on a new [separate] collection that’s in stores,” she added.

Among those who came out to support the collection were ABC’s Robin Roberts, Charles Koppelman, Andy Hilfiger, André Leon Talley, Drake and Anna Wintour.

“I loved it. It was sexy, sophisticated and sporty,” said Roberts, following the show. “She hits all the buttons.” Roberts said she has always admired Williams’ “sense of style and sense of self,” and added that people don’t realize how much work she puts into her fashion collection.

For now, after failing to win the calendar Grand Slam last week,  Williams just wants to take it easy. “I want to go home and lay down,” said Williams. She said the tennis season isn’t over yet and she has three tournaments coming up. “I’m deciding what to do. They’re all in Asia. I had a long year.”