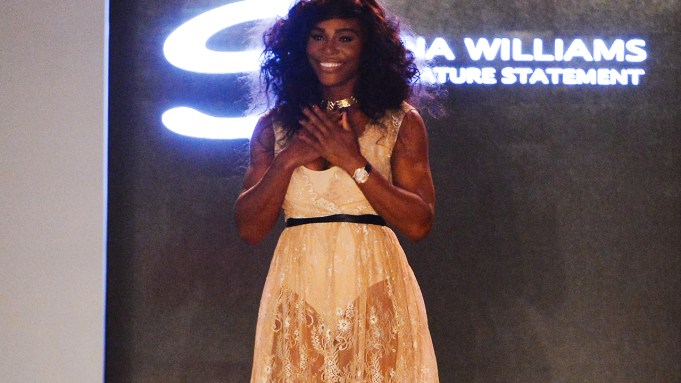 The tennis star didn’t just debut her fall line and unveil the Diamonds Unleashed for Serena Williams, but she also wrote and recorded the spoken word message that played as a backdrop. With each passing look, the see-now-buy-now fall collection became immediately available for consumers on HSN’s web site.

Along with her sister Venus and fellow tennis pro pal Caroline Wozniacki, Williams had the support of a battery of friends — Ciara, Nia Ali, Natasha Lyonne, Lala Anthony and Olympic track star Allyson Felix among them. Another designer adept at buy-now, Tommy Hilfiger, grabbed a front row seat with his wife Dee Ocleppo at the Kia Style360 show. HSN chief executive officer Mindy Grossman and president Bill Brand know Ocleppo professionally, since she also has a HSN line, as does Iris Apfel, who later made her way backstage to congratulate Williams.

Ciara, in thigh-high boots, barely there shorts, a silvery top and baseball hat, bolted backstage as best she could. “I’m so proud of her first and foremost. Her collection was so amazing from start to finish. I loved the shapes and I loved the simplicity of it all. It was very classic, clean modern woman, sexy — all in one,” she said. “That’s a really good challenge. When you keep things simple and still have great impact fashion-wise.”

With alternating aerial images of New York City’s skyline serving as a backdrop, models walked in no great rush, with some taking nearly a minute to walk the short runway. The pace was intentional, Williams later explained. “I wanted my models and my customers to see it when it was not flying by. I thought it was really important to have an opportunity because sometimes the photographs take longer to put up [online]. I told the models, ‘When you go out, make this your moment, listen to the words, feel that you’re empowered and strong. This is your moment to say, ‘I am woman.’”

The Nike-sponsored athlete said she wrote the spoken words after Wimbledon and during the Olympics. “I was just really feeling powerful. [I wanted] people to come to my show but to leave with something more than fashion. I wanted them to leave with something deeper than that,” she said (and no, her musician friend Common did not help in any way.) “I’ve always written things. I guess I’m really arty…during the Olympics, there was so much going on with all the women doing so well. And at Wimbledon, the reporters kept asking me what I felt about being one of the greatest female athletes. I was like, ‘Why don’t they ever ask a male athlete that?’ I just wanted to empower women and to take a look at that stipulation and remind them how amazing and powerful we are.”

Ciara seemed to be on board with that slow-and-steady approach to work. “I’m working on my album and I’m taking my time. I don’t want to say anything about it until it’s time. But I’m super, superproud of what’s happening. It will come when it’s ready,” she said, declining to reveal the name. “I have to save the good for last.”

Williams was so engulfed in fashion mode that she never saw a trace of Stan Wawrinka’s win over Novak Djokovic in the U.S. Open men’s finals. With Monday’s show behind her, she planned to exhale. “I don’t think I breathed the whole time that was happening — that was like 20 minutes of holding my breath,” she said.