Seven For All Mankind has teamed with photographer Mika Ninagawa to produce a colorful capsule collection. 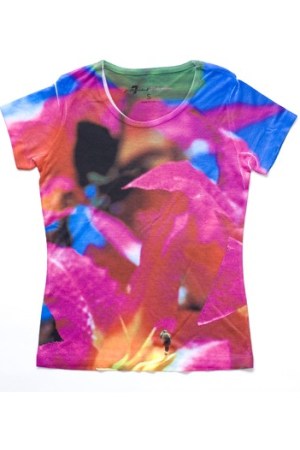 SEVEN UP: Seven For All Mankind has teamed with photographer Mika Ninagawa to produce a colorful capsule collection of T-shirts and jeans. Ninagawa, who is known for her lush still lifes of flowers, goldfish and landscapes, transformed her artistic vision into seven pieces including printed jeans and a pair of distressed denim shorts featuring colorful pockets that hang out. The American brand is feting the collection Aug. 18 with a launch party at its Tokyo store. The line will also be rolled out to markets including the U.S., China, Singapore, South Korea and Australia. Retail prices in Japan range from 12,600 yen to 27,090 yen, or about $147 to $316.

BEAGLE BUG BRIGADE: After last month’s bed bug infestations at Hollister, Abercrombie & Fitch and Victoria’s Secret in Manhattan, Bergdorf Goodman is taking no chances. A team of beagles is periodically patrolling the premises at Bergdorf’s women’s and men’s stores on Fifth Avenue, and they’re trained to sniff out the creepy crawlers. “We haven’t had any reported cases of bed bugs, but we’ve decided to be on the safe side. It’s something our customers care about,” said Ginger Reeder, corporate spokeswoman for the Neiman Marcus Group, which operates Neiman Marcus and Bergdorf Goodman. She said the dogs patrol on a regular basis, and there’s also a general pest control plan in place at Neiman Marcus’ distribution centers. As far as the three Hollister, A&F and Victoria’s Secret stores that were plagued by the bed bugs, they all said they’re bug-free now after extermination procedures.

PAYDAY FOR ANGELA AHRENDTS: Burberry chief executive officer Angela Ahrendts this week cashed in some of her shares in the company — to the tune of 3.4 million pounds, or $5.3 million at current exchange. A Burberry spokesman confirmed that Ahrendts sold about 400,000 shares priced between 8.56 pounds, or $13.44, and 8.65 pounds, or $13.58, and paid 814,000 pounds, or $1.28 million, in taxes on the gain. She still owns about 364,000 shares — and that’s not even counting her stock options and future share awards. The spokesman said Ahrendts’ move was: “A routine personal decision,” and declined further comment.

CHINESE WHISPERS: Could H&M be looking to the Orient for its next designer collaboration? The Swedish fast-fashion giant on Wednesday declined to comment on speculation it will partner with Taiwanese label Shiatzy Chen for its next limited edition collection, due to hit stores in November. “We have as a company policy not to comment on rumors,” said a company spokeswoman. A representative for Schiatzy Chen in Paris, reached by telephone, said she was not aware of any plans for an H&M collaboration. Officials at Schiatzy Chen headquarters in Taiwan were not immediately reachable. The luxury label, launched in 1978, offers a modern spin on traditional Chinese designs in what has been dubbed “neo-Chinese chic.” Popular with Taipei’s elite, Schiatzy Chen has set about conquering an international following, with a store in Paris and a growing presence in China. The label has been showing at Paris Fashion Week since 2008.