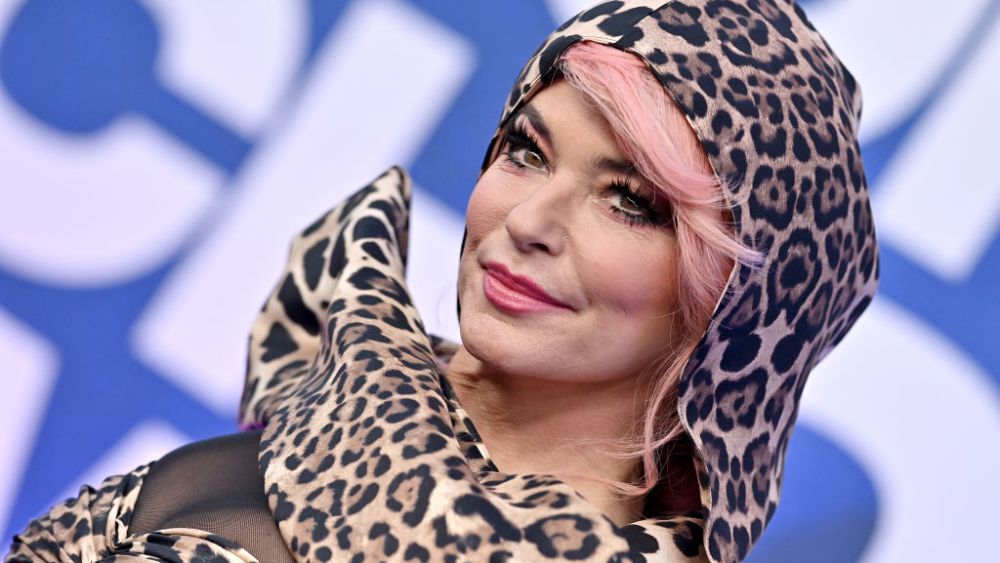 Shania Twain arrived on the red carpet for the 2022 People’s Choice Awards on Tuesday in Santa Monica, California, wearing an animal-inspired dress.

For this year’s ceremony, the singer wore a dress with a leopard-print silk hood and cape shawl, leopard-print bra cups, sheer long sleeves, a sheer bodice and a floor-length black velvet skirt custom designed by Rodarte. The singer’s only notable accessory was her wedding ring, leaving her outfit to speak for itself.

Twain went for a matte coral pink lip, pink blush and heavy eye makeup, with statement eyelashes. Her eyes were adorned with pink and blue eye shadow. For hair, she had it highlighted bright pink, coordinating with her makeup.

Twain received this year’s People’s Choice Award for Music Icon, presented to her by her friend, actor Billy Porter.

During the awards show, she took to the stage to perform in a custom Diesel bright red coat-style dress with pants and a zip-up corset underneath designed by Glenn Martens. Twain accessorized the look with coordinating gloves, a cowboy hat and sunglasses.

The People’s Choice Awards is a show where fans honor a year of outstanding pop culture entertainment in TV, film, acting and music, with winners chosen by the public. This year’s award show was hosted by comedian Kenan Thompson, and also awarded Lizzo as the People’s Champion Award and Ryan Reynolds with the People’s Icon award.