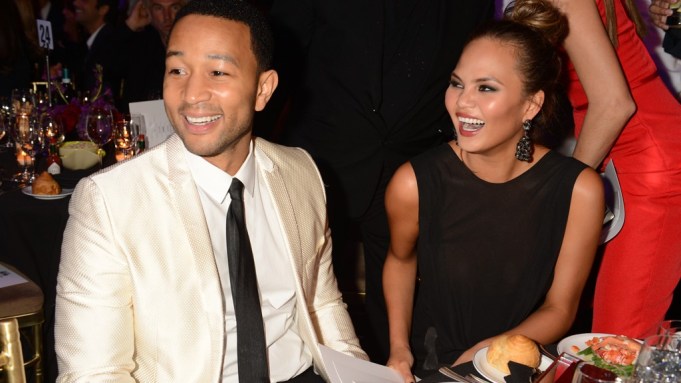 GAME NIGHT: There were plentiful famous faces at Cipriani 42nd Street Friday night during Shape & Men’s Fitness pre-Super Bowl bash. The guest list boasted actors, models, reality stars, musicians and athletes alike, most of whom were split in their picks for Super Bowl victor. “My predication is Seattle by four. You can quote me on that,” said a Brooks Brothers-clad Stephen Colbert, who will appear in a game day Super Bowl commercial for Wonderful Pistachios. “What do I win if I get it right? How about a subscription to Women’s Wear Daily?”

John Legend, who performed that evening, as did Mary J. Blige and Marc Anthony, said he was on the fence about whether the Denver Broncos or Seattle Seahawks would come out on top on game day.

“I’m not predicting. I’m rooting for Peyton Manning though,” said Legend, despite his wife Chrissy Teigen saying she would don a “Seahawks jersey” during the big game.

For Tyson Beckford, who was wearing Seven For All Mankind jeans and a G-Star jacket, Seattle had the edge.

“[I’m predicting] Seahawks by seven,” said Beckford, who was honored the day before as a Jack Brewer Foundation global sports ambassador at the United Nations. “I’m a Giants fan but there’s only one Manning who can throw in that stadium and who understands the win. Peyton is not one of them. Anytime he’s come here he’s not done really well so, well, we’ll see.”

Beckford said that although he had tickets to the game he would most likely stay home to avoid the frigid January temperatures and watch Super Bowl commercials.

“Especially when your team’s not playing, [commercials are] the fun part,” he said.

At least one of the evening’s celebs confessed to being a football novice. When asked what she’d be doing on Super Bowl Sunday, Blige, in a sparkling Gucci pantsuit, said she was keeping it low key.

“Just [going] to watch the game you know. I’m not going to be there, I’m going to be home, ” said Blige, adding that she’d be lounging in sweat pants or pajamas during the game. “I don’t know [who’s going to win]. I don’t know because I’m really not a football fan.”

“Both Super Bowl teams are from places where they have medical marijuana legalized, can you believe that?,” Ross told the crowd of about 800, adding, “I’ve never done a show in Grand Central Station. It’s fu–ing trippy.”

During the evening three Movado timepieces, each in an oversized box signed by more than 20 celebrities in attendance, were auctioned for  $15,000, benefiting each performers’ charities of choice: The Show Me Campaign for Legend, The Foundation for the Advancement of Women Now, Inc.for Blige, and Maestro Cares Foundation for Anthony.