Sharon Stone touched down in Tokyo on Friday for the launch of the jewelry collection she designed for Damiani. 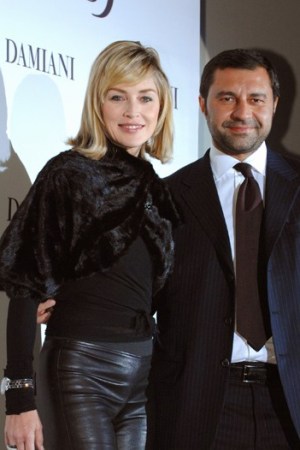 STONE’S ROCKS: Sharon Stone touched down in Tokyo on Friday for the launch of the jewelry collection she designed for Damiani — and spoke her mind in characteristic fashion. Stone addressed a packed movie theater in Ginza, chatting at length about the cause the jewelry supports — a portion of the proceeds go toward building water wells in developing countries. “We saw a kind of poverty that we don’t understand in our daily lives,” the actress said of her recent trip to Uganda with Damiani vice president Giorgio Damiani. “We don’t experience and understand what it really means to have nothing to eat. Literally zero to eat.” The jewelry pieces, which feature raw, unpolished diamonds and burnt gold and silver settings, were designed for men, but could also be unisex. Stone said a women’s collection called Maji, the Swahili word for water, will bow in February. She expressed her appreciation for Japan and its culture, but chided the audience about one thing she can’t stomach: the traditional Japanese breakfast featuring smoked fish. “You people need to go for American breakfast,” she advised. “No wonder everyone’s so thin….They need pancakes.”

WINDOWS OF OPPORTUNITY: Fashionair.com is putting its spotlight on Simon Doonan. The Web site went behind the scenes to film Barneys New York’s creative director as he whipped up holiday windows for the store. The five- to seven-minute segment, which also includes an interview and biography of Doonan, airs on Thanksgiving Day, just in time to fire up the crowds for Black Friday.

FOR STARTERS: Strawberry will open its 23rd store in New York today at 2091 Broadway near 73rd Street. The 2,632-square-foot juniors-friendly store is next door to Urban Outfitters and a block south of American Apparel. Opening-day shoppers who spend $20 or more will get a free eco-friendly shoulder bag. Strawberry’s director of marketing, Susan Leventhal, said, “We chose the Upper West Side because of its diverse demographic population and the continuing increase of families moving into this area with young junior girls shopping for trendy and affordable clothing.”

DOWNING HONORED: “For weeks I had a fashion emergency,” confessed Zac Posen, before introducing Neiman Marcus senior vice president and fashion director Ken Downing, who was honored at last week’s Help USA luncheon at Tavern on the Green. Posen explained how, at a Neiman’s fashion show in Los Angeles, just six models showed up. “It was impossible to work with that few. I was pulling shoes off and doing the zippers,” and all with the assistance of Downing. There was some back-and-forth decision-making on the extent of the show, Downing admitted, hence the model shortfall. “I counted eight models,” Downing said. Ultimately, it all worked out. “We are a crazy industry, but we have a heart and soul,” Downing told the crowd of 355, which raised more than $500,000 at the lunch for Help USA scholarships. Others honored were ABC correspondent Deborah Roberts and Dorothy Hamilton, founder of the French Culinary Institute. Fifteen scholarships were distributed by Help USA, which provides housing, job training and social services for the homeless and victims of domestic violence.

CHEER LEADING: Coach has tapped 30 fashion bloggers to rave about their faves. Glam, Purse Blog, What I Wore, I’m Not Obsessed and The Coveted are among the blogs chosen to participate in Coach’s Holiday Blog-a-Day initiative, which started Friday and runs to Dec. 19. The Holiday Blog-a-Day will be featured as a page on Coach’s Web site and on the firm’s Facebook page. Each day, there will be a choice blog focusing on product reviews, gifting, giveaways and pictorials. Each blog will interpret how best to wear the new Audrey Satchel and Sequin Amanda collection.