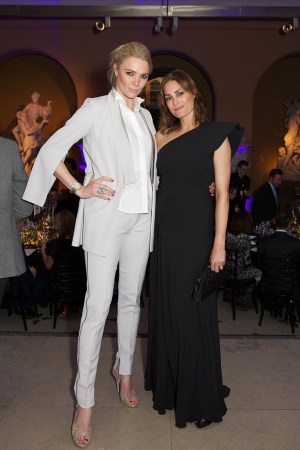 Hugo Boss Prize Awarded to a Photographer for First Time

Maluma Gets Into Design With Latin Billboard Awards Looks

SHAUN LEANE FETES MCQUEEN SHOW: A fashionable crowd got another chance to take a tour of the “Alexander McQueen: Savage Beauty” exhibition at London’s V&A Monday night, when jeweler Shaun Leane — who has a number of his collaborative designs with McQueen in the show— hosted a dinner and private view of the exhibition. Guests including Yasmin Le Bon, Robert Konjic, Olivia Grant and Jodie Kidd all gathered at the dinner— which Leane hosted with Samsung BlueHouse, a virtual private members club – to listen to Leane talk about his and the late designer’s sometimes free-wheeling working process.

“We were best friends and 22 years old….we’d finish work and go and have a beer at [east London pub] The Eagle on Farringdon Road and catch up, then talk about work and inspire each other and get excited and talk about the next show – that’s where our ideas would come,” Leane related of the duo’s first collaborations. He recalled one silver bodice that he’d designed for McQueen, with metal roses blooming from the garment. “When I look at that piece it makes me smile because we designed it on a serviette at The Eagle…and then it hit the runway of Givenchy couture [for spring 2000] in Paris,” Leane said.

The jeweler noted that working with McQueen was a turning point in his career. “Lee [Alexander McQueen] gave me total freedom and a platform where I could express my ideas. He helped me push boundaries from my traditional training,” said Leane. “There was such an energy— everybody who worked for McQueen was always so inspired, respected him so much and valued his mind and his genius— we wanted to prove that anything was possible and we did. And so did he.”

Earlier in the evening, Le Bon was one of the guests to wander around the exhibition, making the most of the lack of the day time crowds. But while taking in the Cabinet of Curiosities, the room dedicated to the atavistic and fetishistic paraphernalia produced by McQueen in collaboration with a number of accessory designers, including milliner Philip Treacy and Leane, Le Bon was sternly asked to make her way to dinner by a security guard. “It’s just all so good. Just a little longer,” she protested.