Shay Mitchell is known to travel as often as three times per month, but these days, she’s staying “grounded.”

The frequency with which the actress, best known for her role as Emily Fields on ABC’s “Pretty Little Liars,” travels has slowed since she became pregnant earlier this year — but it still fuels her entrepreneurial spirit. Mitchell’s world travels led her to create her own luggage and travel brand, Béis. The line launched in October 2018 in partnership with Beach House Group, the company behind Millie Bobby Brown’s beauty brand. Mitchell wanted luggage that would help her stay organized, yet fashionable, something chic, but affordable. So she started sketching on paper napkins during her many flights.

“I was creating items that weren’t out there for me that I wanted for myself,” Mitchell said. “I’d be on the road, on a plane, on a train, car, wherever, in motion. I looked up these pieces to see if they existed and they didn’t. If they did, they weren’t to my style aesthetic. That’s when I started drawing. I’d be on planes heading to different jobs, and I’d be drawing on plane paper napkins. And that’s how it started.” 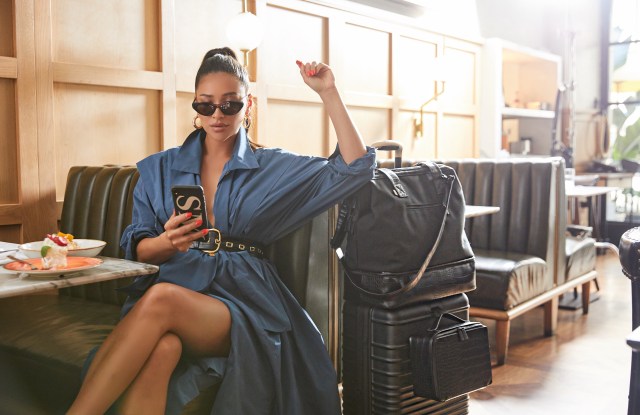 Less than a year after launch, Béis is said to have grown more than 200 percent. It is on track to do $20 million in sales in its first year, according to industry sources. Its current retail partners are Nordstrom and Revolve.

Part of the success of Béis comes from Mitchell’s relationship with her online audience. She counts 25.6 million Instagram followers and 175,000 followers on Béis’ own account. About 80 percent of traffic to Beistravel.com comes through mobile devices, with 70 percent of traffic coming directly from Instagram.

“When I was on a show, I could talk to [fans] about story outline and my character. Now it’s about my line,” she said, adding that she does reply to fans from Béis’ account. “So many of the ideas that they’ll mention of what they want to see coming up, we already have being sampled or being sent over. I look so closely at how they use the product, what they like about it, what they don’t like, what they want to see more of.”

Her followers have helped guide new launches for Béis, including a color range, which launched in August. Mitchell hadn’t planned on dropping color at all this year — the brand actually takes its name from the Spanish word for beige — but the request for color options was so great, said Mitchell, she gave in.

Today, Béis’ fall collection drops on its web site. It will be available at Nordstrom and Revolve starting Sept. 11.

Béis’ tight distribution strategy is intentional. A Canadian native, Mitchell always sought out Nordstrom on her visits to the States and knew she wanted to partner with the retailer when it came time to officially launch.

“I heard such great things of [Nordstrom] from other brands I spoke to prior to partnering with them and I think Nordstrom’s a fashion house,” she said. “It gives [Béis] credibility in the fashion space and in the travel space. The same with Revolve.”

Since launch, Mitchell has aimed to drop new collections about every other month. She estimated that Béis will have released more than 100 items by the end of 2019.

Thus far, each drop has sold consistently well, with each new collection selling out completely. A recent launch of 300 limited-edition mesh totes sold out in six minutes.

Mitchell doesn’t have plans to expand to other categories beyond travel — yet, though she does intend to launch a baby range.

“We’re going to be launching baby early first quarter of next year,” she said. “That will definitely be something I’ll be getting a lot of experience in. I’ve already been learning so much from different moms. Sky isn’t the limit with us. We could really do anything.”

Asked what she’s most looking forward to about being a mother, Mitchell said, “the unknown.”

“I don’t know what she’s gonna be like,” she continued, of her unborn daughter. “You can get as much advice from people you know and other mothers around you, but at the end of the day, everybody’s experience is so different. I’m ready to be uncomfortable again in a new role. I’m also excited to be able to have her be a little travel guinea pig for me and see what works with us and what makes our travel experiences easier and how I can make it easier for other families. I’m excited for a lot of things. The birth? Well, I don’t know about that yet. I can get back to you on that after.”

With a team of just six people for Béis, Mitchell stays highly involved in the brand’s day-to-day functions. The key, she said, is prioritization, a skill she learned when she first began her acting career.

“Being thrown into a really popular show for my first job here in the States, I learned very quickly that you have to have priorities,” she said. “For me, doing whatever I feel passionate about, that’s what I’m gonna work the hardest on.”

Her advice for aspiring female founders? Make your passion your day job.

“Find something that you can’t find in the market yourself and if you can, do it better,” she said. “You need to be passionate about what it is you want to go into because it’s not always gonna be peaches and rainbows. There’s a lot of hardships that come with it, a lot of fallbacks, but with that, you bounce back and you come back even stronger and learn from it. Just don’t expect the road to be completely paved. It makes the story so much more exciting when it’s a little bit bumpier.”