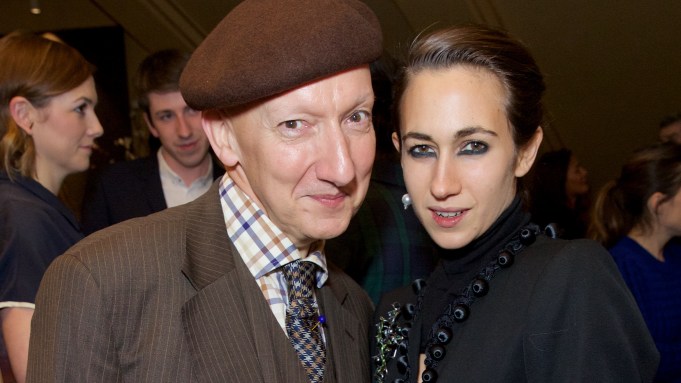 THE FUTURE OF FILM: ShowStudio hosted its inaugural fashion film awards in London on Wednesday evening.

Held at the Regent Street Cinema, the evening featured screenings of the 10 films shortlisted in the competition, followed by a discussion on the evolution and future of fashion film.

“I’ve known Nick [Knight] since he was at college and he was the first to create fashion films, I don’t know if it’s because he was so clever and he could sniff out what would happen in the future,” Stephen Jones told WWD. “A good film tells a story, even if that story is about black-on-black. I work on feature films all the time, because when I look at a two-dimensional image it just doesn’t look alive to me.”

Jewelry designer Delfina Delettrez of the Fendi family believes films have the potential to become viral. “It’s increasingly becoming the media of choice,” she said. “Although not entirely — you’ll always need to see, touch and experience a piece of clothing in its full dimension.” Fashion films have been part of her family’s DNA. Fendi created one of the first fashion films in 1977, titled “Histoire d’Eau,” to launch the label’s first ready-to-wear collection.

While the competition was based on a wide brief, young filmmakers were asked to submit a fashion film that was between 15 seconds and 5 minutes long. More than 600 films from 52 countries were submitted, some of which were shot on mobile phones, while others used advanced technologies such as 3-D scanning.

Maksim Bashkaev was named the winner for his film “Outlaw.” Shot in Bashkaev’s native Moscow, the film features clothing from Outlaw Moscow, an emerging label that the 25-year-old cofounded.

“We are not professional designers or filmmakers; this was the first time we attempted this,” Maksim Bashkaev said. “The goal was to show a different side of Russia, an intellectual, free and open-minded side.”

For Knight, it was Bashkaev’s statement outerwear that stood out.

“It was the fashion in the film that made me pick ‘Outlaw’ as the winner. I wanted those coats,” said Knight. He wanted to highlight that although not the only criterion, the clothing featured in a fashion film is a key factor.

In terms of the key elements that make a good fashion film, Knight believes fashion is key. “I want to quote Ruth Hogben, who said it’s the fashion that makes a great fashion film,” said Knight. “It’s true. You also need a great fashion eye. One of our submissions from a young filmmaker from Jakarta showed a beautiful man just putting a normal white shirt on. You could tell that fashion filmmaker understood elegance, beauty and fashion and it’s about all those things. Part of the reason we asked people across the world to do this is to give them access to the industry and great fashion.”

Other members of the judging panel included Pugh, Daphne Guinness, Nicola Formichetti and Ruth Hogben, a film director who used to work as Knight’s assistant.

Pugh has utilized film to showcase his collections in the past. In place of hosting a runway show to showcase his spring-summer 2011 line in 2010, he commissioned Hogben to direct a film, which was viewed in Paris’ Barcy stadium.

“There were a few white lies told to the Chambre Syndicale because we still wanted to be listed as a show in their schedule,” Gareth Pugh said. “But they are into the idea of pushing things forward, so there were no hard feelings. It’s good to go out of one’s comfort zone; it meant that I could readdress the whole context in which people saw my work. For a fashion designer, it’s about regaining that idea of control. When you send a girl out onto a runway, if she trips or blinks at the wrong time, that defines your work for that season; a photo goes through so many different filters that aren’t at your disposal.”

Bashkaev was awarded a grant of 10,000 pounds, or $14,600 at current exchange, to produce a fashion film and will receive mentorship from Nick Knight and the ShowStudio team.