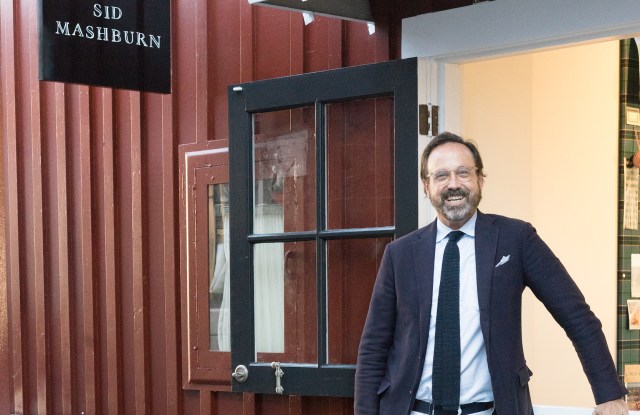 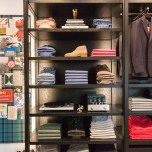 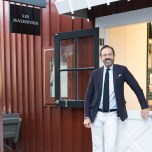 Atlanta-based men’s wear retailer Sid Mashburn’s first Los Angeles store, at the Brentwood Country Mart, opens today, a men’s-only space that also houses a custom tailoring shop. Mashburn, who was one of the first men’s wear designers at J. Crew and also held design positions at Ralph Lauren, Tommy Hilfiger and Lands’ End, started his eponymous line in 2007. He and wife Ann, a former Glamour and Vogue staffer who worked for Polly Mellen, together formed a mini-retail chain that now consists of four connected men’s and women’s stores (they each have separate storefronts) in Atlanta, Washington, D.C., Houston and Dallas. Los Angeles is their fifth location.

The Sid Mashburn label offers men relaxed tailoring and outerwear pieces with a polished take, such as quilted wool jackets. Shirting and jackets are offered in several cuts and can be customized in-store. While he became known for his shirting and jackets that offered a preppy-meets-Southern take, Mashburn has expanded his brand to include sportswear, denim and accessories.

Ann, meanwhile, designs chic and functional pieces inspired by her travel throughout Asia as well as her former New York stomping grounds. Both brands sit alongside a curated selection of third-party brands such as Tretorn, Isabel Marant and Edward Green.

The Mashburns said they’ve been eyeing the West Coast for some time, but it was Brentwood Country Mart owner Jim Rosenfield who approached them when a space became available in his eclectic, barnlike complex on Los Angeles’ tony westside. At around 1,000-square feet, however, it wasn’t large enough to also house a women’s store.

“Maybe one day if a space becomes available we’ll add one, but for now we thought Brentwood was the perfect location for a men’s store because there are so many stylish industry men who live there,” said Mashburn, referring to the myriad actors and agents who call the community home. They also love shopping locally. The Country Mart is home to several brands that operate stores elsewhere in Los Angeles: Christian Louboutin, Velvet, Kendall Conrad and Jenni Kayne, as well as one-off destinations like Pippa Small and Malia Mills. When Gywneth Paltrow opened er first Goop pop-up, she did so at the Country Mart, her childhood neighborhood, and the area she and her mother Blythe Danner still call home.

Mashburn says he’s not trying to reinvent the wheel, but his take on personalized luxury retail on a micro-scale is one of the newest trends popping up in the fashion-forward California market. “I really do think men enjoy shopping when they realize that it can be a fun experience, and when they see how much better they feel in a well-cut suit,” he said.