Buyers, brand executives and designers feted the end of fashion week in Paris on Sunday night. 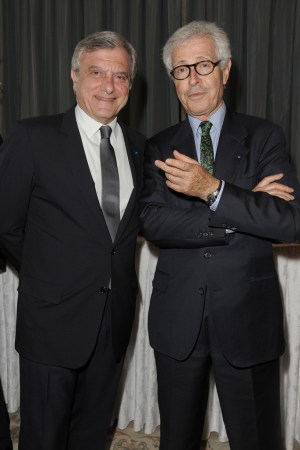 HOME STRETCH: Men’s fashion week is over, but the show goes on. Such was the mood at the closing cocktail Sunday night in Paris hosted by Sidney Toledano, president of the Chambre Syndicale de la Mode Masculine, men’s fashion’s governing body.

Acne Studios’ chairman Mikael Schiller said the firm’s next step would be to “combine e-tail with retail.” “Our dream is to have same-day delivery and faster service — say, a jacket is no longer available in your size, we can send it to you,” Schiller said.

Although the Swedish brand continues to add brick-and-mortar stores — with Melbourne, Hong Kong and Berlin units to open before year-end — Schiller said synergies between the two areas bear “huge potential.” He added that while e-commerce currently accounts for 10 percent of the firm’s total turnover, “retail and e-tail combined surpassed wholesale for the first time this year.”

Toledano recalled how 20 years ago, European brands were mainly doing men’s via licensing. “Now it’s as important as women’s, and Paris is playing an important role in this. Italians have excellent factories, Paris has ateliers,” he said.

Toledano, chief executive of Dior, said Dior Homme is growing so quickly, the company recently had to move to bigger offices. “Men’s has always had a share of the pie, but it’s the luxury and fashion sector of men’s wear that is increasing globally,” he said.

For men’s wear designer Boris Bidjan Saberi, it’s all about numbers anyway. “I’m very much into numerology. It helps me make sense of all the things that are happening to me,” he said, tugging down the neck of his T-shirt to give a glimpse of some of the many digits tattooed on his body.