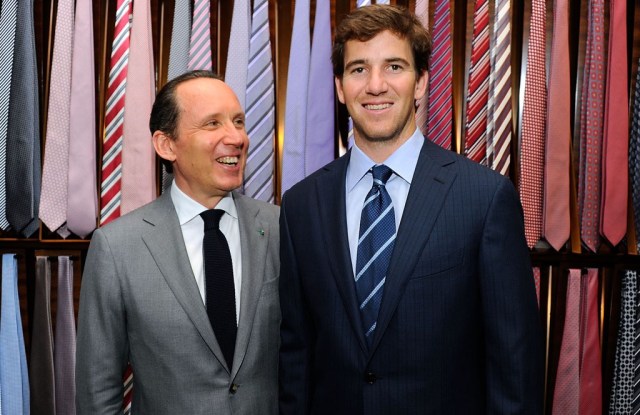 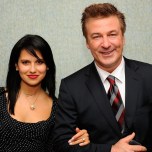 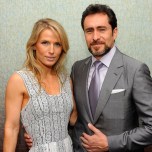 SILKEN CANVAS: Eli Manning arrived five minutes before the end of Ermenegildo Zegna’s silk-themed fete at its Fifth Avenue flagship in Manhattan on Wednesday. But the Super Bowl MVP had a good reason for his tardiness — he was stuck a few blocks away in rehearsals for “Saturday Night Live,” which he’ll host this weekend. Alas, Alec Baldwin, who has hosted “SNL” a record-breaking 16 times, had already left and wasn’t around to provide any pointers.

Other guests like restaurateur Danny Meyer, architect Peter Marino and Tom Ford chairman Domenico De Sole were on hand for the unveiling of five luminous artworks by Emil Lukas fashioned from Zegna-produced silk threads. “It’s the first time I’ve used silk that I know of. Normally it would be cotton or polyester,” said Lukas, who traveled to the Zegna mill in Trivero, Italy, for research. “They have a library with volumes of books for every recipe of every weave and fiber they’ve ever made. It’s mind-blowing.”

The works will remain on display in the New York store through May 9, after which two will travel to the Costa Mesa and Beverly Hills stores in California, two will be returned to the Sperone Westwater gallery that reps the artist, and one, a personal favorite of Gildo Zegna, will likely end up with the chief executive officer in Europe.

RELATED STORY: Zegna Puts Arty Side on Display in Rome >>

Demián Bichir, the Mexican actor nominated for an Oscar earlier this year for “A Better Life,” said he’s been wearing Zegna since being outfitted by the brand during the swirl of awards season. “I love that it’s a family business. And they work with organic cotton and they take care of the farmers who work with the cotton,” he noted admiringly. Bichir will next be seen in Oliver Stone’s “Savages” this summer and just joined the cast of the next Robert Rodriguez thriller, “Machete Kills.”