The Laurence King Publishing biography is a glimpse into the life and career of one of New York City's most accomplished artists.

Keith Haring sits on a ladder, in front of the bright orange undercoat on which he will shortly paint his mural Crack is Wack. New York Park Commissioner Stern holds the umbrella. (Photo by Owen Franken/Corbis via Getty Images)

Keith Haring was an idealistic, miraculous and astonishing innovator, according to Simon Doonan, writer, fashion industry darling and author of “Keith Haring (Lives of the Artist).”

Releasing on Feb. 23, “Keith Haring” is a brief look at the life and times and career of the young artist, who helped shift culture in New York City in the 1980s. Doonan highlights the artist’s upbringing and move to New York City, humble beginnings hosting shows at Club 57 and pivotal moments such as painting a mural on the Berlin Wall, which is the back cover of the book.

“I tried to pick out the 10 moments that were the most significant things that propelled his career forward,” Doonan explained about the biography, describing Haring as “a pinball flying around crashing into every aspect of culture.”

Doonan in 2019 published “Drag: The Complete History (A Look at the History and Culture of Drag)” with Laurence King Publishing, who asked Doonan to write the biography on Keith Haring. “I said yes. Emphatically yes,” Doonan said.

“Keith always said the people don’t have the art they deserve,” he added. “He felt that art wasn’t speaking to the people. He wanted to be an artist that changed people’s lives.” 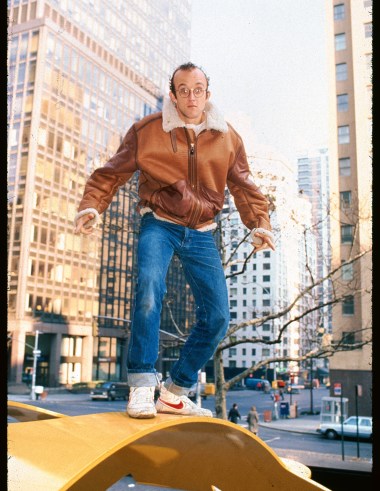 Doonan mentioned the Crack is Wack mural as an example. Haring created a mural in East Harlem in 1986 during the crack epidemic as a message against using the drug. He was arrested for vandalism of city property for the work, but avoided charges after the support of locals and media outlets.

Doonan introduces the biography by saying he learned about Haring from a friend named Vikki, who showed him a shirt of hers that Haring drew on at an opening he hosted. “That was a period of New York where it was a small group of people changing culture and they were all in downtown Manhattan,” Doonan said. “It was the first time there was a real mashup of art, fashion and music. Art stayed away from fashion, because they felt it wasn’t good for them. Haring was said to care too much about fashion.”

Haring customized denim jackets for Barneys, Doonan said, and he cites the Haring’s boutique Pop Shop as an innovative idea that influenced artist collaborations and pop-up shops. The SoHo store on Lafayette Street first opened in 1986, and a store opened in Tokyo in 1987. The Tokyo store closed in 1988 and the New York City location would shutter its doors in 2005.

“Art historically has been quite elitist, but Keith dealt with imagery inspired by cartoons, and everybody digs it,” Doonan said. “There’s something marvelously unique about his work. He was a cultural connector with tremendous energy and lived life at warp speed and I wanted to capture that tremendous energy.”

“Keith Haring (Lives of the Artist)” will be available on the Laurence King Publishing website, Barnes & Noble, Bookshop.org and Amazon.