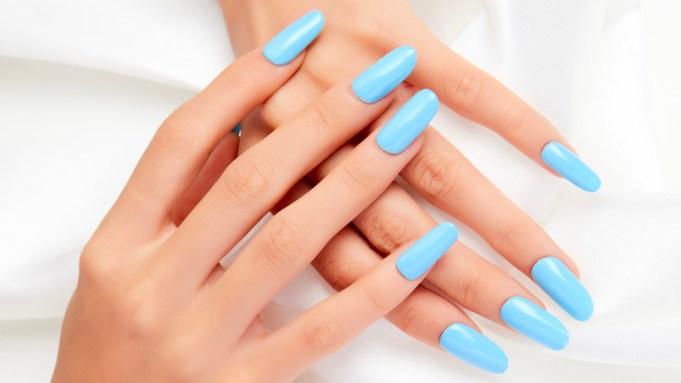 An unexpected nail color has recently emerged as the newest manicure trend for summer, according to TikTok, becoming the latest testament to the social media platform’s influence over beauty culture.

Light blue nail polish is the lacquer of the moment among Gen Z — thanks to all of the conversation that has emerged from TikTok videos tagged #lightbluenails in recent weeks that now have more than 8.8 million views.

The TikTok-trending topic includes women asking men their opinion of the ideal nail color, concluding that a light or sky blue manicure was overwhelmingly the most approved hue by men. Though the experimental surveys don’t align with the scientific method, there is some validity to the conclusions.

Leatrice Eiseman — director of the Pantone Color Institute and a color consultant for many industries, including the fashion and cosmetics space — says blue is often reported as a favorite color regardless of gender. Eiseman says this favorability may be because blue is often associated with positive memories from an early age, like time at the beach or a beautiful bright summer sky.

“[Blue] is very reassuring,” Eiseman tells WWD. “Blue from many standpoints has positive reactions. In general terms, based on the studies we’ve done, it’s more than likely going to be positive.”

These positive early childhood associations often lead people wearing the color — especially in a light shade — to receive compliments from people of all genders, which only adds to the positive association, she explained. But given traditional gender-based subscription of colors upon birth, with blue still often associated with “boys” and pink with “girls,” Eiseman says men may more strongly store a blue color preference “in their memory bank.”

“If you show men in blue in almost any context — whether it’s a sweater, tie, or nail polish — they will have a positive reaction,” Eiseman says. “It does not mean they find it more alluring or a woman will be sexier with nail polish. It’s because they like blue however it is used.”

According to color psychology, blue is noted for evoking feelings of calmness, serenity and stability. Though blue is often still associated with men more than women, the feelings blue evokes actually echo characteristics closely associated with femininity.

Eisman also suggests blue may just be a nice nail color often overlooked by women in favor of the pinks and reds that have been deemed “classic manicure colors.”

But requesting the hue at the nail salon may indicate more than just being privy to trends, according to TikTok. For some Gen Z teens, the calm blue shade serves as way to subtly communicate their relationship status as taken.