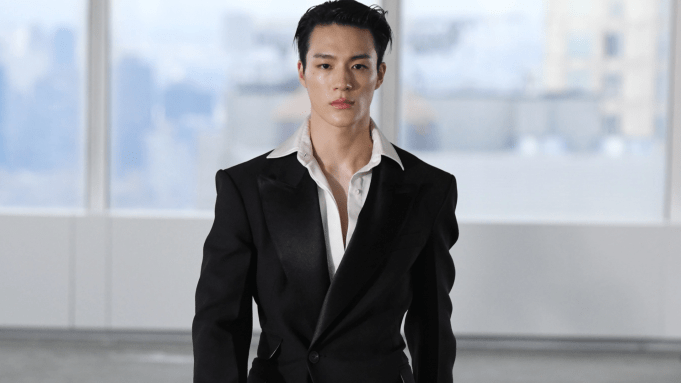 After turning heads last spring at the Met Gala with K-Pop group NCT’s Johnny, Peter Do took his collaboration with SM Entertainment, Korea’s largest entertainment company, one step further at his spring 2023 show on Sept. 13 during New York Fashion Week.

WWD spoke to the SM Entertainment roster in attendance: Jeno of NCT, Seulgi of Red Velvet and two rookies, Shohei and Eunseok, who it is speculated will make their official music debut soon.

The show’s invites were presented as memory boxes, which included an old-school mix CD featuring music from various SM Entertainment artists, a nod to the music Do listened to growing up.

K-pop and fashion often go hand-in-hand. “For K-pop, the full concept is important and fashion plays a huge role in bringing ideas and concepts to life,” said Seulgi. “Because of this, K-pop tends to show off the latest fashion and can also lead trends. There’s a synergy between the two because it brings fashion to those who may think fashion is difficult to approach.”

Eunseok added, “Dance moves can look different depending on what you wear, and fashion has the ability to bring out more of an individuals’ charms. K-pop and fashion are extremely important to each other because they are both art forms of expressing yourself.”

Jeno of NCT opened the show, who Do said embodies “the Peter Do man,” making him the first K-pop star to open a New York Fashion Week runway show.

After an initial walkthrough, on-site staff were complimenting Jeno backstage for mastering his walk in platform boots. When asked about the challenge, Jeno said: “I was really nervous because it was my first time walking in a show, but I got a lot of help from my team and was able to learn so much.”

Jeno wore a backless tuxedo jacket with pants to accompany the platform boots. He thought the look matched his personal style and brought him confidence. “It would be great to wear the look on stage some day.”

Shohei and Eunseok, who were introduced to the world just a few months ago as part of SM Entertainment’s rookie program, SM Rookies, also made their runway debuts.

Backstage, their camaraderie was front and center as they got ready to hit the runway, with their staff cheering them on and wishing them luck. Shohei said he loved trying something new with his look, especially because it was “the complete opposite of what I normally wear. Even though a white shirt and black pants seem like a simple combination, because of the exposed chest, I was able to present a sexy and chic vibe.”

Overall, the event for them was surreal. “I still can’t believe that I walked a runway show as a model, and I felt undeserving of the opportunity because it’s such a high honor,” Eunseok said.

“I was so surprised when I found out that I was selected to participate in the show. I don’t have much stage experience in general, so I was quite worried as well. But I researched by watching a variety of past shows’ videos. I knew this was an opportunity that would help me, so I prepared with that in mind,” Shohei added.

SM Entertainment had a presence not just on the runway, though, as Seulgi of Red Velvet drew attention in the front row. Seulgi, who is just weeks away from her solo music debut, was in an all-black look wearing classic Peter Do fashion, with her black hair and platform boots pulling the look together.

She said that she instantly knew her selects when prepping her look for the show. “I liked everything we tried in the fitting session because everything has a very chic mood, but the look we decided clicked as soon as I put it on. It was such a confidence booster and it made me feel like I wanted to walk as well.”

Seulgi’s attendance was a full-circle moment for the Peter Do brand. “When we started the brand, we were listening to Red Velvet on repeat while building studio furniture,” he said. In response, Seulgi said: “I heard Peter especially likes ‘Russian Roulette.’ It makes me proud and excited to hear how our music was able to inspire someone.”

Peter Do presented 60 looks that highlighted key silhouettes of the brand’s past, reworked for the present for future generations to cherish, in line with the show’s theme of time. “It was so fun and I hope I can continue to have opportunities like this in the future,” Jeno said.