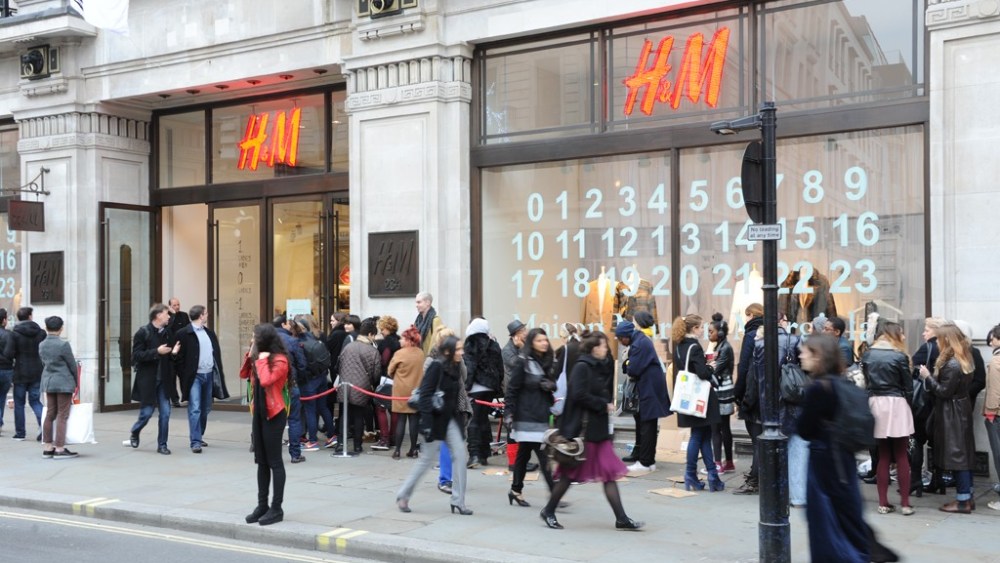 PARIS — The launch Thursday of the Maison Martin Margiela collection at H&M drew smaller crowds than usual in Europe and the U.S., but diehard fans of the brand lined up at dawn for a chance to snag a collector’s item.

About 300 people were waiting for H&M’s Fifth Avenue flagship to open Thursday morning. Each store in Manhattan was given 430 color-coded wristbands to use for crowd control; 30 consumers could enter the store at one time. Many of the pieces sold out on Thursday, including the white sneakers and candy-wrapper clutch.

We are pleased with the selling of the collection; it is exactly what we expected,” a spokeswoman said. “We’re also [pleased] with the reception from our customers for the launch in the 230 stores worldwide.”

On Wednesday night in New York, H&M kicked off a celebration for its newest Manhattan store, a two floor, 25,000-square-foot unit at The Shops at Columbus Circle. The store is unique because its entire second floor is devoted to men’s and it has its own entrance. The store opening party was coupled with a Margiela pre-shopping event. The crowd of invited guests eagerly attacked the one-sleeve dresses, deconstructed leather jackets, fusion of two dresses, and leather belt jacket.

Margareta van den Bosch, former head of design and now a creative adviser to H&M, said, “The Margiela clothes are all iconic and labeled with the date they first appeared.

“It [Margiela] is different from what we’ve done lately,” she added. “We’ve done a lot of glamorous things. This is more conceptual. There’s more tailoring, more shapes, surrealist ideas such as printed fur, empty watch bracelets. There’s a sense of humor. It’s something that may be difficult for Americans to understand. But many people missed Margiela and he’s coming back now.”

The prices didn’t deter Margiela fans in Berlin. Olga Blumhardt, who heads up the fashion journalism program at Berlin’s Akademie Mode & Design, bought the men’s suit for herself and women’s items for friends who couldn’t make it to the store. “The pieces are great,” she said. “It may be hard for some customers who bought the originals years ago to see them reproduced again for H&M. You could say it’s out of bounds, but then, that’s typical Margiela.”

At the Boulevard Haussmann store in Paris, shoe designer Adelyne Vacchelli, 27, noted the crowd was much thinner than for the launch of the Lanvin for H&M collection last year. Nonetheless, she had set aside a budget of 250 euros, or $318, for a black dress and accessories.

While H&M staff handed out coffee and croissants at the Champs-Elysées flagship, they dispensed with the color-coded bracelets due to the relatively small crowd.

Cosmetics executive Anton Ranchin, 38, arrived at the store shortly after 8 a.m., having attended a preview shopping party there the previous night, which drew close to 3,000 guests, including French actors Virginie Ledoyen and Nicolas Duvauchelle. “The racks were cleared out in a matter of minutes,” he said, adding that he still managed to snag a grey blazer. For Ranchin, the draw of the collection is that it revisits archival designs. “This is like a ‘greatest hits’ of the house, at a really attractive price,” he said. “It’s not just about buying something, but finding things that no longer exist.”

In Milan, about 250 people got the colored bracelet providing access to Margiela collection at H&M’s store on Corso Vittorio Emanuele. “I arrived here yesterday at 9 p.m.,” said Alfonso Reda, a 17-year-old student who flew from Southern Italy to attend the launch in Milan. “I know the brand and I really liked the idea that this is not merely a collaboration, but a reedition of some iconic pieces of the fashion house.”

London distributed wristbands to about 250 people at the opening. “All the stock we have is in the store now and we expect it all to sell out today,” said an H&M spokeswoman.

Van den Bosch feigned ignorance when asked about the next designer partnership. “We’re taking a little time off,” she said. “We have had so many launches, we decided not to do anything for spring. For fall 2013, we’ll do something.”