"Jersey Shore" star Snooki will be wearing a pickle dress for Halloween. Also, rumor has it Kate Moss will be fronting a lipstick ad for Dior. 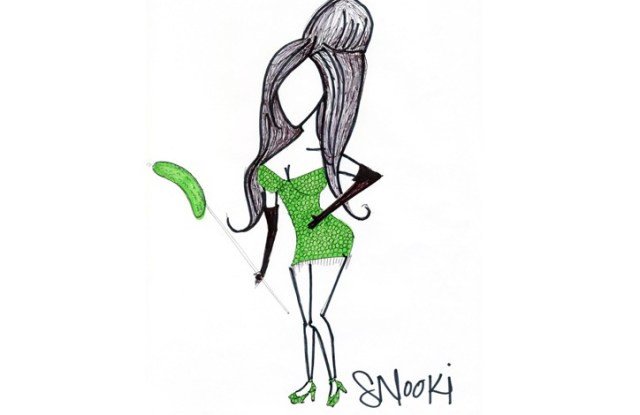 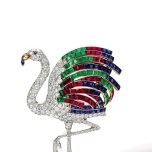 IN A PICKLE: In case anyone was wondering what “Jersey Shore” star Nicole “Snooki” Polizzi will be donning for Halloween, it will be a pickle dress. The petite, pouf-adorned, pickle-loving Polizzi is slated to be in Las Vegas judging a $10,000 costume contest at the Jet nightclub in The Mirage hotel on Saturday. The Light Group, which operates a stable of the biggest clubs in Sin City, arranged the specially designed outfit for Polizzi. It includes a fringed bustier dress covered in green, pickle-shaped sequins and a light-up scepter in the shape of a pickle.

This story first appeared in the October 29, 2010 issue of WWD. Subscribe Today.

DIOR’S MOSS MOMENT? Rumor has it Kate Moss will be fronting an advertisement for Parfums Christian Dior — and sources say it’s for a lipstick. Maybe that’s why Moss was in Paris in early October attending the most recent Dior fashion show (a move that unleashed a paparazzi scrum and left one photographer with a bloodied forehead). A Dior spokesman could not be reached for comment.

FIVE ALIVE: Houston socialite Becca Cason Thrash plans to rock the Louvre museum once again, having snared Maroon 5 as the featured act for her second Liaisons au Louvre fund-raising gala on Nov. 16 in Paris. The black-tie event, under the high patronage of French First Lady Carla Bruni-Sarkozy, is slated to attract a wide swath of European royals and other high rollers. Richard Prince, slated to attend with art power broker Larry Gagosian, has donated one of his iconic joke paintings for the live auction — a work valued between $650,000 and $750,000. Thrash has also coaxed luxury brands to donate watches for a silent auction and aims to raise $3 million.

SIGNS OF CHANGE: Pierre Cardin’s admirers packed Assouline’s shop at The Plaza Tuesday night for a meet-and-greet book signing with the designer. While he’s “very happy” to be back in New York, Cardin said a whirlwind stay is planned. He was honored Thursday night by the Fashion Group International, and tonight he will stage a runway show at Milk Studios. After all, Gotham is where his business got rolling 60 years ago. But his schedule does not allow for any museum visits, although that should not be detrimental to collections down the road. “I’m not inspired by museums. I go because I like to know about history,” the designer said. “Museums are about the past. My designs are about the future.”

XOXO DUCHESS: Duchess of Windsor fans will get another crack at buying some of her jewels that were first auctioned by Sotheby’s in 1987. The sale is set for Nov. 30 at the auction house’s London outpost, but as of today, visitors to its Upper East Side galleries will be able to case the 20 glittery pieces that were bought by one individual during the last go-round. A Cartier flamingo brooch is expected to be a showstopper, fetching between $1.5 and $2.3 million. The total sale should tally around $4 million, said Lisa Hubbard, chairman of North & South America International Jewelry Department. “She was a lucky girl who was absolutely in the right place at the right time with the best taste possible. She was a tour de force with jewelry. I don’t know if we will see anything like it in our time,” Hubbard said.

VERSACE OUT EAST: Versace teamed up with Philippine real estate company Century Properties to develop The Milano Residences, a 53-story tower in Manila’s financial district. All the common areas, including the lobby, the spa and the library, will be furnished with the brand’s home collection. The project is expected to be ready in 2015. This interior design commission comes six months after Versace’s agreement with Damac Properties for the creation of a 30-story building in Beirut.

IVANKA AT SAKS: Ivanka Trump and husband Jared Kushner held a cocktail reception at Saks Fifth Avenue’s flagship to celebrate the debut of Trump’s jewelry line at the retailer last evening. The collection will also debut at five other Saks locations — in Beverly Hills, San Francisco, Palm Beach and Chevy Chase, Md. Trump said of the premiere, “The Saks customer is looking for easy-to-wear styles that are chic, glamorous and timeless, and my jewelry will click with them right away.” She wore earrings and an enamel cuff from her collection and a dramatic, red, white and black Gucci dress.

A DIFFERENT CROWD: Tourneau chief executive officer Jim Seuss brought a little of his fashion past to an otherwise suit-swarmed party at Tourneau’s flagship on 57th Street last night. Seuss said of the difference between the event and soirees at previous company Cole Haan, “Normally I’m used to a lot more of a fashion crowd…and there’s men here! It’s been really interesting….Hopefully I’m bringing some new energy and excitement to the watch world.” Among the guests were lawyer-turned-media-magnate Dan Abrams, jewelry designer Anna Sheffield and former creative director for Harry Winston and co-founder of design company Omhu, Susy Korb.

The gathering was Seuss’ first as ceo, and was hosted by Leonard Green & Partners, a private equity firm and owner of the Tourneau brand.

Seuss mentioned that Tourneau had hired architect firm 8 Inc. (who has designed for Apple and Coach) to redesign the company’s store on 53rd Street, and planned to unveil the new look in June.