Nicole Miller was front-and-center at the alpine-inspired fashion show organized by the magazine at Hudson Studios. 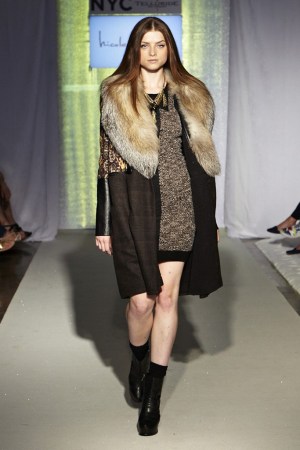 A Look Back at Jane Fonda’s Iconic Style

SNOW JOB: A whip-fast skier on snow and water, Nicole Miller was front-and-center at the alpine-inspired fashion show, organized by Snow magazine at Hudson Studios. The designer watched as a few of her on and off-the-slopes looks passed by on the runway. Bogner, SOS, Bergans of Norway and Rossignol were among the other labels that showed off parkas, fur-trimmed items jackets and other wintery styles. Miller heard about Snow Fashion NYC through the magazine’s editor Barb Sanders who moonlights as a ski instructor in Aspen, which is where Miller likes to ski.

SOS’ Katharina Damm was another discerning critic at the runway show. Aside from handling sales from New York for the Denmark-based skiwear maker, she is an actress and IMG model who walked the runway for Carine Roitfeld’s amFAR show in Cannes. “It was so much fun. We had 20 gold dresses from all the top designers and we raised 1.2 million euros,” she said.

As for skiwear, Damm said, “The clothes have to be functional but fashion is almost as important. My family has been involved with SOS for 30 years and a year and half ago, we decided to make it more fashionable but it’s still technical.