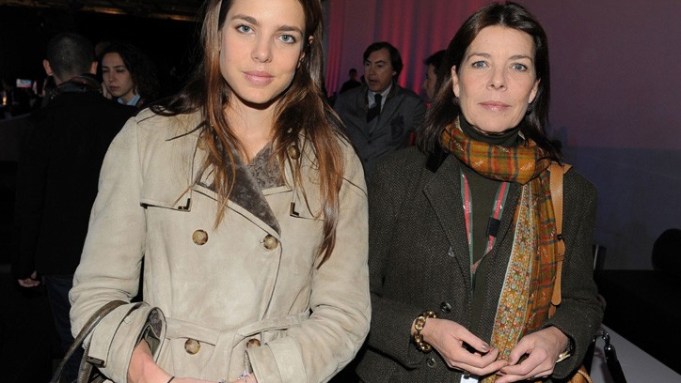 Horses are divisive: Either you’re indifferent to them, or they’re such a passion you never forget the name of the first one you ever rode. “Tintero,” Charlotte Casiraghi enthused about hers Sunday at the Gucci Masters show-jumping event, where she competed. “I was fourth yesterday. My horse jumped really well,” said Casiraghi, who was joined by her mother Princess Caroline of Hanover at a VIP luncheon the Italian brand hosted.

“Frosty Lad” gave Georgina Bloomberg, daughter of New York City Mayor Michael Bloomberg and an accomplished equestrian, her first ride in the saddle, but she stood on the sidelines Sunday, leaning on a cane owing to a bad fall last month. Her first book, “The A Circuit,” about the horse-show scene, is out in May from Bloomsbury. “It’s fiction: a light read for kids and young adults,” she explained.

Actress Imogen Poots, who just wrapped up a comedy-cum-horror movie “Fright Night” opposite Colin Farrell, confessed she’s not much of a horse enthusiast. However, she couldn’t avoid them in another film she completed just prior: “Jane Eyre.” “I learned how to ride side saddle and canter,” she beamed.

Otis Ferry, son of crooner Bryan Ferry and a huntsman, felt right at home amid the thoroughbreds. “I work with horses, very aptly,” he chuffed. His brother, Tara, a drummer, said he’s about to start touring with his dad, starting with a gig in Newcastle in January, and he’s in the studio working on a first album for his band, Rubber Kiss Goodbye.