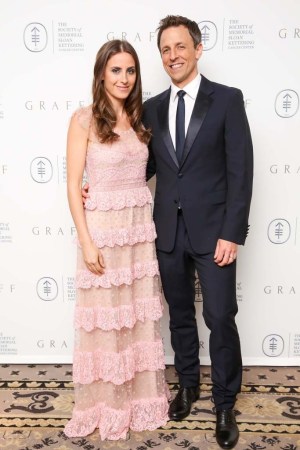 LATE NIGHT WITH MSK: The Waldorf-Astoria upped the fancy factor on Tuesday evening, acting as host for the Society of Memorial Sloan Kettering’s 7th Annual Spring Ball, sponsored by Graff and Valentino. “They have their own brand of Champagne,” said a bejeweled wife, scolding her beer-swilling husband. The formal affair brought out social scene regulars, such as Tory Burch, Jamie Tisch, Patricia Lansing Herrera, Shoshanna Gruss, Julie Macklowe, Nicky Hilton and Zani Gugelman.

Several members of the gala crew were co-chairs for the night: Martha Vietor Glass, Lisa McCarthy, Claudia Overstrom, Maria Villalba and newcomer Alexi Ashe Meyers, who had brought along husband Seth Meyers, who would later perform standup as this year’s post-dinner entertainment. “You always get a little nervous when you’re doing standup in the Waldorf Astoria,” Meyers quipped during the cocktail hour. Over a first course of smoked salmon and caviar, guests speculated about how Meyers’ gala debut would fare. “It could be really funny, but could also be really not funny,” waged one gentleman, reaching for his wine glass. “He’s the guy who does ‘Family Guy,’ right?”