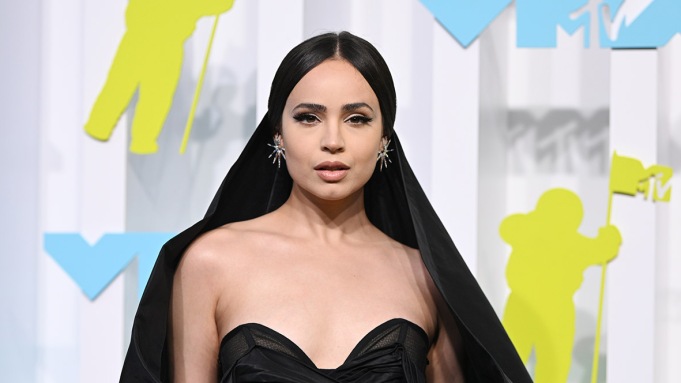 Sofia Carson was cloaked in dark glamour at the MTV Video Music Awards on Sunday in Newark, N.J.

The “Purple Hearts” actress and singer wore a black fitted sleeveless gown with a sweetheart sheer neckline and an oversize hood by Carolina Herrera. Carson was styled by Nicolas Bru, whom she has collaborated with for past red carpet looks.

The Revlon brand ambassador accessorized with a diamond ring and oversize star-shaped earring studs by David Yurman. Her dark brown hair was swept into a low bun and her makeup was kept simple with a smokey eye and nude lip.

The singer presented the award for the Best K-pop category, which was awarded to “Lalisa” by Lisa from Blackpink. The K-pop group also won the award for Best Metaverse Performance.

Carson reunited with her former “Descendants” costar Dove Cameron at the awards show. Cameron won the Best New Artist award and performed during the pre-show. Other previous Disney stars like Olivia Rodrigo and Sabrina Carpenter were also 2022 nominees.

Carson’s latest film “Purple Hearts” was released on July 29. The romance movie entered the Netflix All Time Films List as the seventh most watched film in the history of the streaming platform.