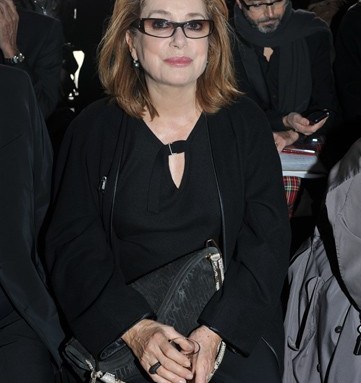 CATHERINE’S KITCHEN: Catherine Deneuve used a break from filming “La Cuisine” (“The Kitchen”) in the South of France to attend the Dries Van Noten show Wednesday. “It’s not related to food,” she said of the movie, by young French director Julie Lopes-Curval. “It’s more symbolic — more about a place of living.” Deneuve said she would also make her traditional stop at Yves Saint Laurent tonight.

SHOWING OFF: Amanda Lear was in full rehearsal at the Givenchy presentation Wednesday night for the one-woman show she starts in France next year, regaling reporters with tales galore. She’s also heading to Rome to record a new album. “So perhaps there’s still some life in the old bag,” she said, adding she’s back on the love market since she split up with her Italian boyfriend. “He was half my age, and I was with him long before Demi Moore.” Paris-based actress Lika Minamoto disclosed she’s working on a book about the Franco-Japanese cultural divide. “France is wonderful because you can make a living out of being an artist. It’s taken seriously,” she said. Voluptuous French actress Beatrice Dalle said she plays a nerd in her latest movie, “Domaine,” that’s due to start filming in Austria. “I play a mathematician, but it’s about the poetry of maths,” she said. Margherita Missoni, meanwhile, has experienced some teasing for wearing vintage sparkling Harper’s Bazaar frames — due to an eye problem. “Suzy Menkes says it’s my Sarah Palin look,” she laughed. “It is definitely not inspired by her,” said Missoni, who’s just finished a play in Italy.

POSTER BOYS: Louis Vuitton’s Antoine Arnault, chef Thierry Marx and hairdresser John Nollet might seem unlikely bedfellows, but they’re among 40 notables who posed in underwear and loungewear by French men’s brand Hom to fete its 40th birthday. The portraits, by Paris’ Studio Harcourt, also include Kenzo Takada and Stéphane Rolland. The images will be auctioned off for Sidaction at the Palais de Tokyo next week. Arnault said he’ll be there, trying to goose up the bidding. “I don’t know who else is going to buy a photo of me in my pajamas,” he said at Givenchy on Wednesday night.

CHILD’S PLAY: Sporting a funky, cropped hairdo, Olga Beghisheva, whom Karl Lagerfeld shot for the October issue of Crash magazine, said she had to go “completely bald” for her role as a half-human, half-animal creature in next year’s horror movie “Splice” starring Adrien Brody and Sarah Polley. “Adrien was like a kid on set,” Beghisheva said at Lagerfeld’s signature show Wednesday. “He was always doing magic tricks and stupid things with food.” Vahina Giocante, who turns scientist in her next film, “Black Box,” said she’s in talks for a fashion campaign but wouldn’t fess up about which brand, saying, “I’m very superstitious.” Arly Jover, meanwhile, is squeezing in shows between costume fittings for her next movie. “It’s a mystery set in a hotel in the mountains, kind of like ‘The Shining,’” she said.

SLEEPING BEAUTY: When Stephane Marais created a fresh-faced look backstage at Christian Lacroix Wednesday, he used some products from his signature cosmetics line, which has been defunct since 2005. The makeup artist explained keeping the products in a cool dark place helped prolong their shelf lives, and added he may cook up another line in the future. “I’m thinking about it,” he said.

Meanwhile, makeup maestro Tom Pecheux is cooking up a colorful collaboration. The former Shiseido The Makeup artistic director has teamed up with an unnamed cosmetics company to work on a new color line, which will bow in the spring. The makeup artist was mum on details backstage at Givenchy Wednesday.

MATERIAL WORLD: Leave it to fashion’s prankster politician, Jeremy Scott, to poke fun at the industry’s economic woes. Styling his show in homage to the original Material Girl, dresses splattered with polkadots and gas pumps were featured among the designer’s irreverent lineup, as were T-shirts proclaiming “Let Them Eat Gas,” and “Healthy.” In the audience, Cassette Playa designer Carrie Mundane disclosed she has a host of collaborations due out over the coming months, including a skater shoe for Nike’s Blazer line and a collection of T-shirts codesigned with Rockers. “They feature a mix of my digital prints with their screen prints,” she said. Down the row, a sun-tanned Lady Victoria Hervey said she’ll be launching a new jewelry line in December, designed with Rodrigo Otazu. “It’s quite chunky, it’s quite out there,” she said.