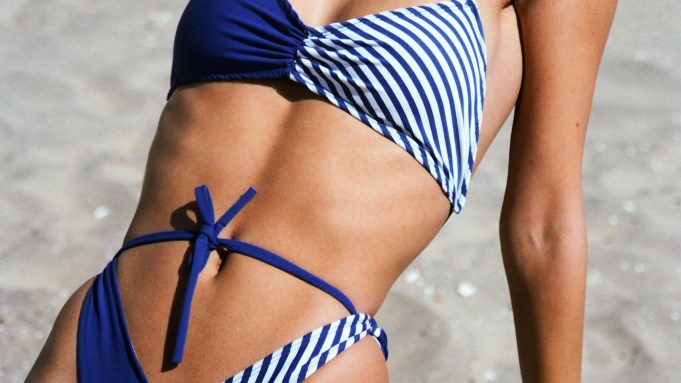 Through exaggeration, provocation and race-car colors — New York-based designer Amelia Lindquist is looking to make a mark on swimwear. Solarium, her new label that launched Monday, is an art project with commercial intent.

The photogenic, Eighties-inspired suits lend themselves to an alternative beach statement as well as prop-styling bait. Lindquist decided to start the line when boyfriend and photographer Mason Dent was looking to create a line of Eighties “babe lighters,” but found it difficult to source the necessary attire.

“He was buying vintage, and I have been sewing since I was eight years old, so I said, ‘Oh, I can make these suits better,’ since he wasn’t really finding what he wanted,” said Lindquist.

The designer is a textile developer by trade — having worked as a production manager for BPD Wash House in Jersey City, where she consulted on fabrics for Alexander Wang and Proenza Schouler. She’s privately consulted for Kanye West and Eckhaus Latta, and was part of a global concept team for CK Calvin Klein Jeans.

In January, Lindquist purchased overlock and coverstitch machines to begin sewing her suits — receiving such emphatic feedback on her Instagram account that she decided to put the styles up for sale. “It’s a bit unexpected, I didn’t think we were creating a brand, but the interest really grew,” she said.

Lindquist sees the line as a collaboration between herself, Dent, and others — with the intention to initiate and probe aesthetic discussion.

“I’m not interested in building a beach lifestyle just because that’s the nature of the product — I’m not really into [the typical] swimwear brand identity,” Lindquist specified of Solarium’s purpose. “We were definitely thinking about the project more in a disconnected art way rather than as a fashion project.”

Solarium sells nine styles — high-cut bikinis, plunging one-pieces and scant monokinis — on its web site. The handmade designs are priced from $150 to $185.

Lindquist, though, has more in the pipeline — with approximately 60 prototypes presently developed.