That’s because women’s breasts are all different. Add to the noise the many measuring options — in-store, online apps and video conferencing, to name a few — and it’s enough to confuse most shoppers.

But Soma, the intimate apparel brand owned by Chico’s FAS, says it has the solution: a “smart bra” called the SomaInnofit bra.

Users slip on the garment, which looks much like a sports bra with a computerized chip in the back. Within seconds, the bra measures the woman’s circumference and cup size using four lines of wire stitching that circle the body. No measuring tapes or awkward dressing room encounters required. 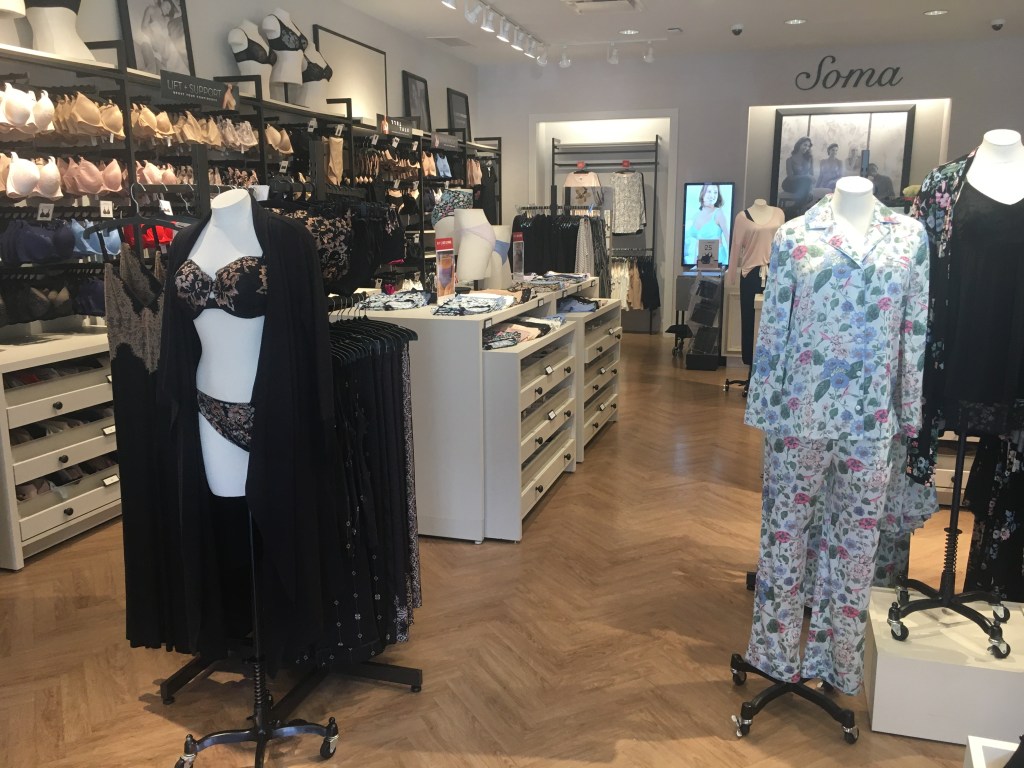 Inside the Soma store in Estero, Fla.  Kellie Ell/ WWD

The results are connected to the in-store associate’s iPad via Bluetooth. They are then able to recommend an assortment of products for the individual. The device usually retails for $69.99 but is currently marked down to $25.

On a recent trip to Florida, WWD stopped by the Estero, Fla., shop, located in the Coconut Point shopping center, about 15 miles south of the company’s Fort Myers, Fla., headquarters, to try out the smart bra — and check out the store.

Soma staff members greeted WWD at the store, which included an assortment of lingerie and sleepwear from not only Soma, but also TellTale, the direct-to-consumer lingerie brand that the company created last year in an effort to reach more Millennials.

Drawers and carefully curated racks of colorful bras, panties, bodysuits and a selection of sleepwear were draped around the shop, along with photos of models in various shapes, sizes and ages. But no measuring tapes.

The entire SomaInnofit process took less than five minutes. Trying on the bras and deciding which ones were keepers took slightly longer.

The Smart bra was introduced earlier this year at the Consumer Electronics Show, marking the first time an intimate apparel retailer entered the tech industry. Since then, van Praag said, more than 50,000 people have downloaded the SomaInnofit app and about 170,000 have been fitted using the bra.

Soma is also the recipient of the Femmy 2020 Award for innovation in intimates and Newsweek magazine recently rated the brand the best brick-and-mortar lingerie experience for 2020. (Luxury brand La Perla and lingerie giant Victoria’s Secret came in second and third, respectively.)

“The business is this continuous pipeline of innovation to surprise and delight,” van Praag said.

Still, Soma has plenty of competition. In addition to market share leader Victoria’s Secret, which has 1,143 stores around the U.S., a number of other, smaller brands are expanding their brick-and-mortar retail presence. Aerie, the intimates brand owned by American Eagle Outfitters, has previously said it would open up to 60 stores this year. Digital lingerie start-up ThirdLove now has two stores — one in New York City and one in Minnesota’s Mall of America — and said it plans to open more in the future. Names such as Intimissimi, Adore Me, Agent Provocateur and Journelle also have physical locations.

But while other brands use Champagne and fancy events to lure in shoppers, Soma loyalists can reuse the SomaInnofit bra up to 200 times at any of the roughly 250 locations across the nation. Or they can download the app to store the results in their smartphones and use the bra at home.

“It’s great over time if you go through a pregnancy or lose weight,” van Praag said. “You can also give it to your sister, your mom, a friend, and then they can use the app from their own device to measure themselves.”