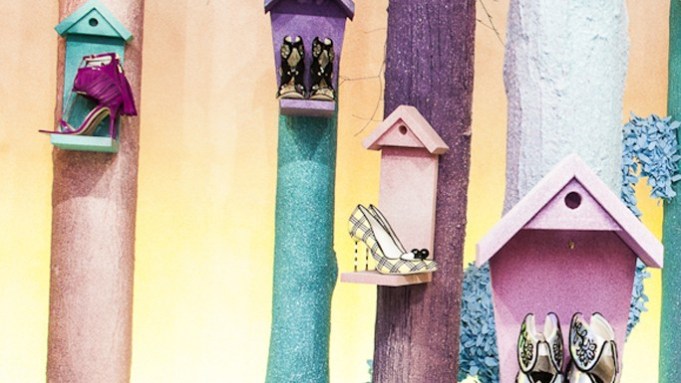 Why take the easy route with an accessories presentation — a showroom with some plain white shelves and decent lighting — when you can get creative and evoke childlike wonderment? Anya Hindmarch and Sophia Webster both made their guests feel like kids again with London presentations that amused and charmed.

It was a painstakingly orchestrated moment of live theater featuring 50,000 dominos set up to fall just so, in Hindmarch’s case. Inspired by Domino Day, a Netherlands tradition, the designer partnered with Mr. Domino — aka Robin Paul Weijers, a world-class expert and record-holder — whose team meticulously installed her set over the course of a week.

They crossed their fingers it would hold steady against, say, a sudden gust of wind or a couple hundred guests trampling to their seats until someone tipped the first trigger. The elaborate effect, collapsing pyramids of colorful tiles along the way, didn’t go off with out a hitch. Alas, one domino did get stuck — but it had a big payoff in terms of entertainment value and mood-lifting cheer.

“The fact that it didn’t go perfectly was kind of fun,” said Hindmarch after the show, noting she had games on her brain when designing the collection, which included thematic pieces such as the Duke Domino, a clutch that looked like a domino, and the Duchess Backgammon, another clutch in shagreen and a multicolored backgammon motif, plus some vibrant classics, like a messenger-style satchel with a multicolored tassel.

For Webster’s second presentation under Topshop’s Newgen patronage, she conjured a little girl’s fantasy forest, complete with rainbows and unicorns. Only it was for big girls, with shoes and boots inspired by “Edward Scissorhands meets rainbow Narnia meets ‘Clueless,’” said Webster. She worked in a variety of materials, including metallic and hologram leather for pumps, peep-toes and boots. Modeled by girls decked out in psychedelic catsuits and rainbow-colored, unicorn-inspired hair, or displayed on birdhouses in the snowy “forest,” Webster’s designs were dramatic, playful and fun — especially the thigh-high, lace-up gladiator boots in hologram leather that are for go-go dancing.