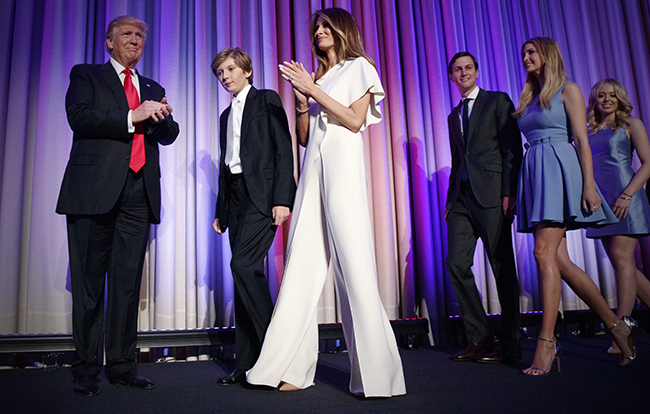 DESIGNER CHALLENGES TRUMP: In an e-mail sent Thursday afternoon, Sophie Theallet has said she will not dress the incoming First Lady Melania Trump and she is calling on other designers to do the same.

Theallet, who did not respond immediately for comment, said in her missive that as an independent fashion brand, “we consider our voice an expression of our artistic and philosophical ideas.”

“As one who celebrates and strives for diversity, individual freedom and respect for all lifestyles, I will not participate in dressing or associating in any way with the next First Lady. The rhetoric of racism, sexism and xenophobia unleashed by her husband’s presidential campaign are incompatible with the shared values we live by.” she wrote. “I encourage my fellow designers to do the same.”

A spokeswoman for Melania Trump did not respond immediately for a request for comment. In the lead-up to Election Night, the former model wore Ralph Lauren, Gucci, Fendi, Dolce & Gabbana and Michael Kors among other labels — all of which she purchased in New York City boutiques or online.

Describing herself as an immigrant, the designer said she has been blessed with the opportunity to pursue her dreams in the U.S., and that dressing First Lady Michelle Obama intermittently over the past eight years has been “a highlight and an honor. She has contributed to having our name recognized and respected worldwide. Her values, actions and grace have always resonated deeply within me.”

At 18, Theallet moved to Paris to attend the esteemed fashion design school Studio Berçot and graduated early after winning France’s “National Young Design Award.” She was then hired by Jean Paul Gaultier. Theallet later worked at Azzedine Alaïa for 10 years before relocating to New York City, where she continued to work for the French designer on a part-time basis. She launched her own label in 2007 and two years after won the CFDA/Vogue Fashion Fund Award.

Noting that her brand “stands against all discrimination and prejudice,” she said, “Our runway shows, ad campaigns and celebrity dressing have always been a celebration of diversity and a reflection of the world we live in.”

Her e-mail continued, “I am well aware it is not wise to get involved in politics. That said, as a family-owned company, our bottom line is not just about money. We value our artistic freedom and always humbly seek to contribute to a more humane, conscious and ethical way to create in this world.”

Theallet’s open letter ended with “Integrity is our only true currency.”