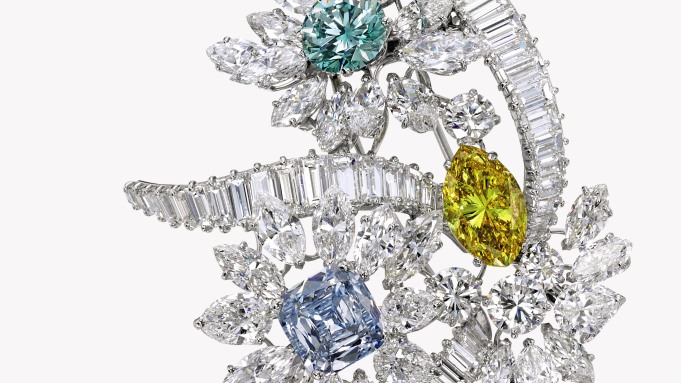 A ROYAL HOLIDAY AUCTION: At the holiday edition of Sotheby’s Magnificent Jewels sale in New York, multiple pieces with a royal history will come under the gavel.

The auction house estimates that the more than 500 lots in the Dec. 9 sale could collectively command more than $52.3 million.

Among the sale’s highlights is a historic platinum necklace by Van Cleef & Arpels that originally belonged to Queen Nazli of Egypt and is set with 217 carats of diamonds. The 1939 piece is estimated to sell for up to $4.6 million. The queen commissioned the necklace, as well as a matching tiara, for her daughter Princess Fawzia’s wedding. According to Sotheby’s, the occasion is said to be one of the most lavish events in modern Egyptian history.

The necklace has remained in a private collection since it was last put up for auction by Sotheby’s in 1975 along with many of Nazli’s other important jewels.

A royal Belperron “suite” from the Duchess of Windsor’s collection will also be up for sale next month.

A pair of white gold, chalcedony, sapphire and diamond cuffs — estimated at up to $600,000 — and a matching necklace with a chalcedony pendant — estimated up to $550,000 — were made by Suzanne Belperron in Paris in 1935.

The suite was first publicly auctioned at a Sotheby’s 1987 Geneva sale devoted to the Duchess’ jewelry collection.

In addition to the royal relics, Magnificent Jewels will also include an array of “exceptional” colored stones including a 25.87 carat sugarloaf cabochon Kashmir sapphire ring — estimated up to $4.5 million. And a pair of unenhanced Colombian emerald earrings, with stones measured at 22.97 and 21.37 carats, are expected to draw up to $2.2 million.

The sale’s preview will open to the public on Dec. 5.